What a fabulous year boxing has had, especially in this country where there are now a record 12 world champions and I am proud to say that three of the very best of them have been nurtured under our banner. 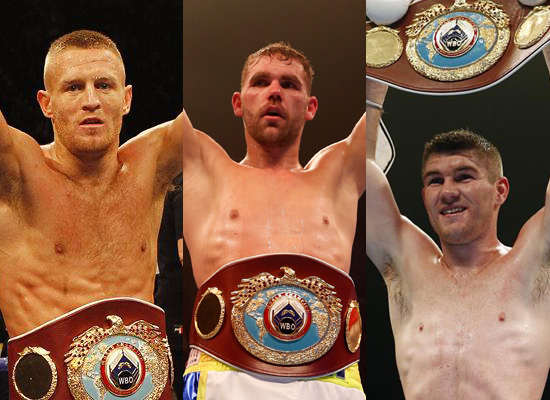 Billy Joe Saunders completed the hat-trick for us on another glory night in Manchester last weekend, boxing with composure and intelligence to extricate the WBO middleweight title from the very capable hands of Ireland’s gentleman of the ring, Andy Lee.

He can now celebrate alongside Liverpool’s lethal Liam Smith, who retained the WBO super-welterweight belt he had won when Mancunian Terry Flanagan so emphatically defended the lightweight title he had acquired in his home city last summer.

Between them they constitute a remarkable trio of home-brewed talent, the sort that has helped place British boxing on top of the world, making it the most consistently successful of any sport in the land during the last 12 months.

The popularity of boxing at all levels continues to surge upwards, and long may it continue.

As I said here earlier this week, ours is the traditional way of doing things, the old-fashioned way if you like, discovering, weaning and ultimately rewarding the world title aspirations of our own loyal young stars – not nicking them from other promoters.

So I feel entitled to a spot of trumpet-blowing as the year comes to a close because not only have we created our own world class fighters but staged exciting and competitive shows around the country for the genuine fans.

Moreover, our exclusive and innovative TV channel BoxNation goes from strength to strength, regularly showing past and present big fights from around the world – this year there were an unmatchable 66 nights of live boxing – plus features, interviews and debates like those on Boxing Matters which set the fans buzzing and arguing.

Unquestionably that was the sporting shock of the year, if not the decade. And I forecast there will be more big upsets to come once the bell clangs for 2016.

In our stable we have some seriously good kids, superstars in the making.

Leaving aside the world champions, the likes of Jack Catterall, Tommy Langford, Liam Williams, Bradley Skeete and Adrian Gonzalez are all cool guys who can box and bang, and are on the brink of the big-time. Mitchell Smith too, now that he’s had his ears boxed, I’m sure will get his act together.

I was particularly impressed with the manner in which Catterall disposed of a Mexican opponent who was no mug and clearly had come to ‘old man’ him. But Catterall would have none of it, took some shots well and did splendid finishing job. He could be the new big name of 2016.

I am also seeking further world title fights for Ovill McKenzie after his controversial Argy-bargy in Buenos Aires and two former champions, cruiserweight Enzo Maccarinelli, after he brought down the curtain on the career of Roy Jones jnr in Moscow, and Paul Butler, who so sure footedly regained his mojo and verve to acquire the vacant EBU super-flyweight title on Saturday.

A fascinating bout between Butler and the undefeated Jamie Conlan is one that would grip fans on both sides of the Irish sea, and we are working towards it.

To add a bit of spice to the division we have signed the South African Zolani Tete, who took the IBF title from Butler in Liverpool last March.

Tete, from Mdantsane in the Eastern Cape, is one of the most explosive punchers in the division with a 18 knockouts in 22 wins, 12 of them inside the first round.

Since beating Butler the 27-year-old southpaw has vacated the title and is now on a mission to become a multi-weight world champion, which we plan to accelerate.

He is an exciting, top-quality addition to our international line-up, joining the fast-rising Star of India Vijender Singh in furthering BoxNation’s interests overseas.

I haven’t been as genuinely excited about an upcoming year for a long time, for there is so much to be achieved in 2016.

As for our own three champs, there are some truly tasty matches waiting to be made.

We kick off the New Year with a real domestic blockbuster, Manchester’s Terry Flanagan defending his WBO title against Merseysider Derry Mathews at the Liverpool Echo Arena on Saturday February 13, with Butler also on the bill.

The Turbo v ‘Dirty Derry’ represents a classic fistic tale of two cities and I’d love to see the winner matched with Anthony Crolla. Let’s hope boxing ‘politricks’ as Lennox Lewis used to call it, doesn’t get in the way.

Towards springtime Liam Smith and Billy Joe Saunders can virtually have the pick of world class names – so watch this space..

And keep watching BoxNation. There’s great news in store about future plans for the fight game’s favourite and most professional channel.

Meantime, a Very Merry Christmas from all at Queensberry Promotions and BoxNation, and thanks for your support.