2018 WILL BE YEAR OF THE FEATHERWEIGHTS 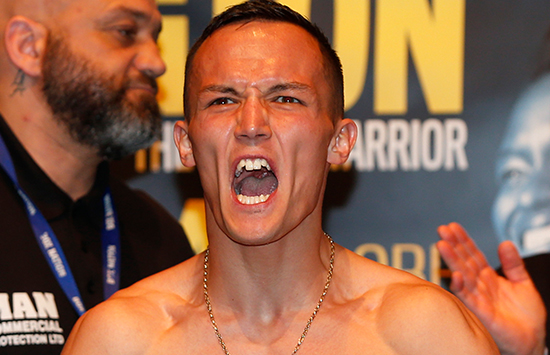 Josh Warrington has been doing more talking than punching as of late, with the Leeds favourite taking up punditry opportunities at the last fights of both Carl Frampton and Lee Selby – as well as sitting in for Barry Jones on the Boxing Hour. In his latest exclusive Fighter Diary, Josh reflects on a year of change for himself and his plan to become a big piece in the current featherweight jigsaw…

I enjoy doing it, I am a boxing fan when I am not in the ring myself, so I would have only been watching those fights anyway from my sofa. So what is better than to be sat ringside expressing my opinions about them?

The year of 2018 promises to be a massive year on the domestic featherweight front and I am hoping I play a huge part in it. If I think back to 12 months ago, I wouldn’t have thought things would have panned out like this.

This time last year – or even 18 months ago – there was all that uproar about my wedding and everything else, so you wouldn’t have imagined I would be in this position.

It’s been a long drawn out 18 months and a lot has happened. It’s been a big year in terms of change of promotion and everything. I’ve had a couple of big fights and now I am looking forward to what next year brings.

It is funny how things turn out in the end. I fought Dennis Ceylan so we could force the fight with Selby and now we are both operating under the same banner.

I’ve always kind of played out scenarios of how I want my life to go. From being a young lad I always dreamed about winning the British title and lifting the belt above my head – and I accomplished that.

The same with the European and I accomplished that. Now, the natural progression is to win a world title and, as a young lad, I did think about it and how it would be something special.

I have always been reluctant to jump the gun too much, but now it is within touching distance. It is all I have been thinking about since winning the European title in 2014 when I was still working 9-5 and delivering my own tickets driving around in my little Ford Fiesta.

It didn’t play out like that, the title fight got offered early and I ended up changing promoters.

As long as you keep that same belief and you are strong enough to chase that goal in front of you, you will get your bit of luck eventually and you will get there.

I might’ve had to go a longer way around and be a bit more patient – along with getting a lot of stick on social media for turning that fight down – but I am here now and I am a year more experienced and I feel like I am reaching my peak.

I am a better boxer than I was last year so things are going my way.