300lb Ustinov Out to Make a Big Splash in Manchester

At 6ft 7 ½ in tall and 300lbs, Russian giant Alexander ‘The Great’ Ustinov is a huge man with a heavyweight plan. 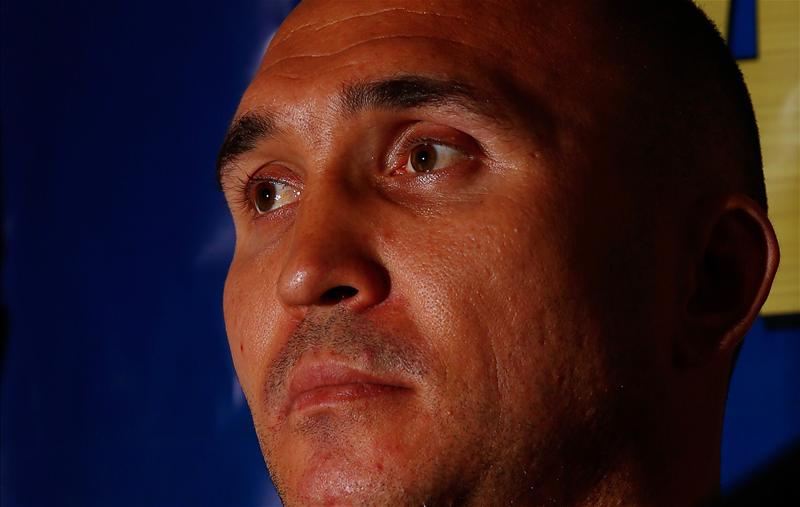 A late starter to our sport at 28, the former European title challenger has lost just once in 31 pro rumbles and brags that he is the man to curtail Klitschko dominance in the blue riband division.

British fans receive a welcome chance to assess Ustinov’s credentials this Saturday when he features on the BoxNation televised ‘Turbo’ promotion from Manchester Velodrome.

The 38 year old Ustinov is a fighting man to the core. Post school, he served with the special forces in the Russian military and, though he had no amateur boxing experience, he is a veteran of 64 paid kick boxing fights, he won multiple K1 Grand Prixs and even dabbled on the MMA circuit.

Once managed by the Klitschko brothers, he now has ambitions to punch Wladimir off his perch. Presently steered by Vlad Hryunov and Frank Warren, the big fella is no stranger to Blighty. Twelve months ago, fresh from lively sparring with Dereck Chisora, he volunteered for a short notice gig with Tyson Fury – only for the Mancunian to withdraw due to a family crisis.

There are already several decent scalps on Ustinov’s slate. One time WBO challenger Ed Mahone was quashed in three, while the likes of Michael Sprott, Monte Barrett, Paolo Vidoz, Denis Bakhtov and David Tua were all clumped to defeat in distant fights.

The sole reverse on his slate – an 11th round stoppage against Bulgarian ‘Cobra’ Kubrat Pulev – came almost three years ago.

He is certainly a King-sized, colourful addition to Saturday’s bill.

‘He is a real Russian fighter with (a) very big punch and good movement. He really, really enjoys fighting. Inside a ring, he has a mentality to destroy every opponent.

‘Yet away from the battle, Alex is complete opposite. He is very nice guy in the street, a good, good man. Everybody loves him. He is true Russian hero. He went to war and won an honour from Russian government.’

Bad Vlad hopes his alliance with the influential Warren will help force the meaningful matches that can elevate this human juggernaut into the mix at world level.

‘I signed Alex with Frank Warren because we believe he is the one with the potential to finally defeat Klitschko,’ declared the Kazakh born, Chekhov based fight face who also guides ex WBA heavyweight boss Alex Povetkin.

‘We just heard news that the WBA is going to rank Ustinov at number seven and my plan with Frank is to move Alexander into a mandatory position for a world title shot. We have to. None of the top guys are prepared to fight him.

‘We will have war with any of your (British) guys. Fury already pulled out last July. Chisora, Price, Haye…..bring them. We phone Eddie Hearn offering Ustinov for Anthony Joshua. We hear back nothing. Trust me, we try to make all these fights but no one has the balls.’