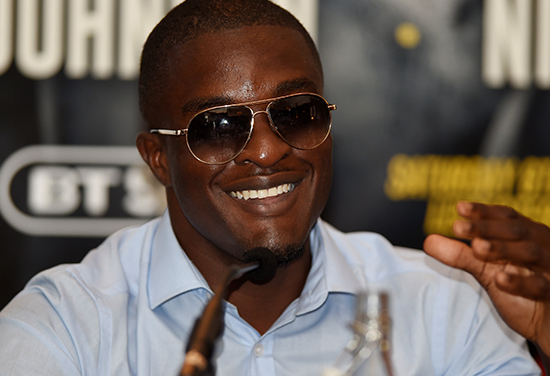 On Saturday, what should be a nailed on contender for ‘Fight of the Year’ takes place in Leicester between Jack Catterall and Ohara Davies with the WBO Intercontinental title at stake and, for the winner, a likely shot at a world title in 2019. Any trash talk has been put on mute by Ohara in the run-up to this highly anticipated clash as punches will speak louder than words, but the Hackney man still took the time to take stock of his progress since teaming up with Frank Warren earlier this year…

I GOT A little bit of a shock when I made my return to the ring under my new team in May. In Leeds against Ahmed Ibrahim I came back to the corner after round one or two and thought ‘this guy is actually good’.

It was a warm-up fight for me and I wasn’t expecting someone coming to win so it was a bit of a shock to the system.

My opponent in June, Paul Kamanga, talked the talk before our fight and I think he came into it thinking he was going to confound everyone by defeating a guy the home crowd thought was going to win easily.

He saw it as his chance to take my place and be on top, but he wasn’t expecting me to be as good as I was. He got an almighty shock when he felt that right hand hit his chin!

I was supposed to be in a different fight against Josh Leather and I was actually happy that one fell through because it would have been a much harder night for me.

I reckon the Leather fight would have been harder than the Catterall one will be.

I rate Josh higher than I rate Catterall as an opponent and when the fight fell through I was like ‘wow, that was going to be a really hard fight for me’ because the way he fights was all wrong for me.

So when what happened, happened, I wasn’t too fussed because if I get someone easier for the same dough I am not one to complain!

So I ended delivering a showreel shot that brought about this fight now against Catterall.

Catterall is also a really good fighter. It is not in his nature to talk much, but his talent and profile don’t match up and, if he wins this fight, he will get the attention he should do.

This is his one chance to get on the big stage and, hopefully for him, it works out.

I am the big name at super lightweight. I am more spoken about than the guy I got beaten by, Josh Taylor, so when you mention the super lightweights in the UK, the first name that comes out of your mouth is Ohara Davies.

That is not me being arrogant, that is just me being honest.

I’ve been getting called out left, right and centre. Everybody wants this fight against me, like I am some sort of golden boy. Everybody has been asking for this fight and Catterall is the one who deserves it most.

I need to be careful in this fight because in boxing one punch can change everything. I need to be fit, sharp and smart because it is a 50-50 fight that can go either way.

There is a lot at stake here, but for me boxing is a job that I do and I am good at. So I don’t feel there is as much at stake for me because I have been in this game for so long and have seen things and how people act. There are not that many good guys in boxing.

I am pleased now that I am under Frank and MTK because they are good, honest men and the good guys, but from what I have seen in the past and from looking at other guys and how they get treated, boxing is an unfair game that I will not make my happiness again.

Regardless of what happens in sport, I am happy in life.

It does contribute to my happiness, but it is not everything to me like it was in the past. My life is a complete movie and I live the best life out of any boxer that I know.