A Happy New Year for Josh (Warrington, that is) but a shock defeat for AJ? 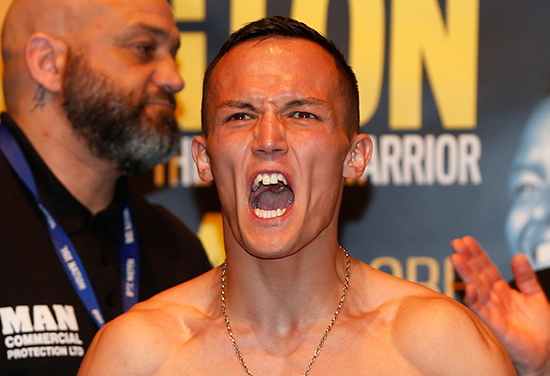 THIS IS THE TIME of year when we scribes make fools of ourselves by predicting what may –or may not – happen in the next 12 months.

So, for one week only, Hubbard’s Cupboard becomes Old Hubbard’s Almanac as I peer into the pages for 2018 and look ahead to possible happenings in the fight game, some of which may surprise, or even amaze, you.

Let’s start by saying it is going to be a fantastic year for fans and fighters alike. No argument about that.

Boxing is burgeoning having re-established itself as one of the world’s most popular and successful sports, not least here in the UK.

So let’s ring the first bell with two bold and highly controversial forecasts, both involving the now renowned fighting moniker of Joshua:

First, Josh Warrington. I’m tipping him to relieve Lee Selby of his IBF world featherweight title in a real humdinger of a scrap in Leeds.

OK, I know from the trolling I received, notably from Wales of course, when I happened to suggest this on BoxNation’s Boxing Matters recently that many think I’m off my trolley, but I stand by my case.

I think ‘Lightning’ Lee is a fine champion and that most think he will know too much and be too smooth and smart an operator for the gritty Yorkshireman.

But I feel Josh has the perfect technique to frustrate him, ploughing forward all the time, shrugging off the jab, crowding and out-gaming him.

And that unnervingly vociferous home Leeds crowd roaring him on is worth a couple of rounds start least.

I thought Warrington gave the most impressive performance of his unblemished 26-fight career so far when he comprehensively defeated the accomplished Dane Dennis Ceylan last time out, whereas Selby seemed to have lost a bit of his edge following a troubled year when successfully defending against Eduardo Ramirez at the Copper Box.

The Old Almanac forecasts a split decision – in Warrington’s favour.

And now for the real shocker: It would not surprise me to see Anthony Joshua lose his own trio of heavyweight crowns to WBO holder Joseph Parker in the spring.

AJ seems to have accumulated a tad too much muscle of late, which is restricting his mobility – and he will need to be nifty against Parker who is a mover rather than a shaker.

Parker may not be the greatest of world heavyweight champions but he is a capable boxer who seems to have a decent chin and knows how to use the ring to steer clear of danger.

But perhaps more ominously I fear that AJ may be due an off night after four years and 20 winning bouts and that the Samoan-born Kiwi, relatively humdrum heavyweight as he may be, looks just the type who might nudge Big Josh towards a sensational points defeat.

ELSEWHERE I AM LOOKING to the new all-singing, all-dancing Billy Joe Saunders to give either Gennady Golovkin or Canelo Alverez the fight –and possibly the fright- of their lives given the deserved opportunity.

Plus Tony Bellew to finally end David Haye’s injury-prone career in their scheduled reprise; James DeGale to regain his world super-middleweight title from Caleb Truax after another hard fight, and then call it a day and Amir Khan’s projected return to the ring after such a long absence to end in a defeat, especially should he elect to meet the now world class Bradley Skeete.

No doubt who will be the big hit of 2018 in every sense. Sensational young Londoner Daniel Dubois will continue to bowl ‘em all over en route to becoming British heavyweight champion as well as being elected Britain’s best young boxer of the year at just 20; similarly destructive power punching from my personal Queensberry favourite, the athletic Anthony Yarde, will see him on the cusp of world light-heavyweight honours.

I take another of my best-liked fighting men, George Groves, to deflate the ego of Chris Eubank jnr – and his dad – and then go on to win the world super middleweight final against Callum Smith.

And finally, Tyson Fury to once again put the heavyweight division’s Biggest Cat among be pugilistic pigeons in a welcome return to the ring.

Happy New Year to all who box and watch. Keep punching.