A SMASHING, BASHING NIGHT AT THE COPPER BOX

IT IS SURE to be a big bash at the Copper Box on Saturday night, especially when you consider two of the most explosive talents in world boxing are once again on parade.

The main course of our bumper show – to be broadcast live on BT Sport and BoxNation – is rightly headlined by two world renowned performers, James DeGale and Lee Selby – defending their world titles, but our starter menu doesn’t half pack a punch.

Anthony Yarde has the opportunity to further enhance his burgeoning reputation against an opponent who has not only kept top company, but also always stayed on his feet.

Nikola Sjekloca, 32-4-1, has shared a ring with the likes of Sakio Bika, Arthur Abraham, Callum Smith, Tyron Zeuge and Robert Stieglitz. On each occasion the judges have been called into play to determine the winner.

So on paper, Anthony has got a tricky customer on his hands, which should present a stubborn challenge for him. Whether it pans out that way, we’ll have to wait and see.

I’d like to see him get a few rounds under his belt, but Anthony is one of these guys who seems to be able to end a fight when he wants to – or when the mood takes him.

In his last fight – against Norbert Nemesapati – if he’d hit Anthony Joshua with some of those shots he might have knocked him over or at least wobbled him.

Anthony is stepping up in class in just his 14th fight, but you always have to bear in mind he is still a young man  learning his trade.

What is so impressive is how he dictates the momentum of fights and seemingly determines how and when he would like to end proceedings.

It is almost like he has precisely rehearsed what he does in the ring. He chooses how he wants to stop opponents and sticks to his own script.

He is so calm and collected in going about his work and that can only be a good sign.

Another who likes to end his night with a bang is Daniel Dubois, who I must say is growing in stature and confidence inside and out of the ring.

He will probably never be the most outgoing heavyweight in the world because his natural politeness and modesty will always come to the fore, but he is developing an aura and has complete belief in himself.

He came to the office last week and it made me think back to the quiet kid we first encountered and the way he has come on.

Daniel has got a steely confidence about him now and he is really growing into all aspects of being a pro.

One thing is for certain, he will wind up being a bit special. He is a clean cut kid with obvious appeal and when I talk to people nowadays he is one of the first names to come into the conversation.

There is a growing fascination over his exploits and he is catching the imagination of the public.

For now though, it is all about Daniel picking up more experience and getting rounds in the bank. It is the only way you learn and the Welshman Dorian Darch provides his next examination at the Copper Box on Saturday.

Coverage from the Copper Box begins at 6.35pm on Saturday, with the action starting on BT Sport at 7.45pm 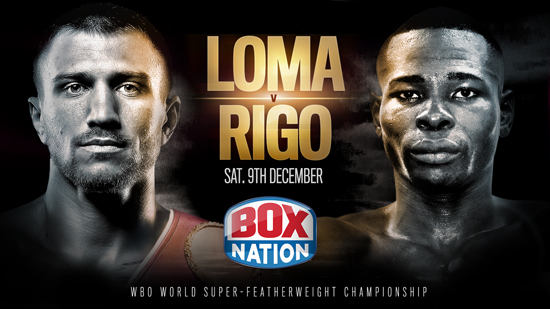 IF THERE IS one fight that will see genuine boxing fans reaching for the coffee pot and resisting the lure of their bed this weekend it is the BoxNation blockbuster between Vasyl Lomachenko and Guillermo Rigondeaux.

It is an unlikely pairing in many ways and one that would possibly have carried more appeal had they met in the middle weight-wise, but it is a match made in heaven for the boxing purist.

Two double Olympic champions with records as amateurs reading something like 396-1 for Lomachenko and 463-12 for Rigondeaux, with the Ukrainian becoming a professional world champion in just his third fight and the Cuban his ninth.

They are two master exponents of their trade who want the biggest fights possible.

That is what they have got this weekend and the fight has found its ideal home on the Channel of Champions.

Coverage from the Madison Square Garden Theater commences at 2am on Sunday morning, live on BoxNation