A warm welcome from Warrington

HE MAY WIND up being a rival in the opposite corner one day, but Josh Warrington had absolutely no issue in welcoming fellow featherweight Carl Frampton to the Frank Warren fold.

Frank now has two feathers winging their way towards world title contention and the two of them are among the biggest draws in British boxing, with massive followings in Leeds and Belfast.

For his part, Josh views the addition of a celebrated two-weight world champion to the ranks as a big plus and one which will positively impact on his own prospects in the long run.

“It is a massive signing for Frank getting Carl onboard,” stated the Leeds Warrior, who is getting ready for his final eliminator for the IBF title against Dennis Ceylan on October 21 at the FD Arena in his home city. “Carl is a brilliant fighter, with worldwide recognition, a huge fanbase and has won world titles at two weight divisions.

“He has got a lot of pedigree behind him and when we talk about having big stadium fights, you want to be getting in with someone like Carl Frampton, who has got that appeal.

“Not only that, he is a good fighter and if me and him were to clash it would be a very entertaining fight.”

With Josh on the cusp of a tilt at a world belt, logic dictates that talk of the two of them entering into combat should be put on hold until there is a big prize in play.

“It makes sense to have a world title and if he can pick up a title from one governing body and I pick up the IBF it would be a unification fight to sell out Elland Road or Windsor Park.

“We’ve both got a big fanbase so there are all the ingredients for a massive fight.

“If anything it is more of a motivation to win a world title when you know that a potential super fight like that can happen.”

Josh also knows that, unlike other potential domestic duels, when this one comes up it would not involve fraught negotiations or unrealistic obstacles being put in the way.

“With us being under the same umbrella there would be no problems like with dual promotions where there can be fall outs over contracts. It could be made a little bit easier – the promoter wants the best for both of his fighters so he will work hard to make that happen.

“I think they would be great fights, I rate Carl highly and in the past I have thought him very entertaining to watch. He has got a good style about him and both of us have got a high workrate and throw a lot of punches.”

With such a fight having two natural homes, Josh agreed that perhaps it is one that should be played over two legs, such would be the demand from both sets of fans.

“Yeah something like that! Most rounds wins and a knockdown scores as two! Or we could just go to extra time.”

If all the pieces fall into place and a meeting between the pair does come to fruition, the recipe is unlikely to include any bad blood.

“He is a genuine lad and when you get characters like Carl, who is pretty straightforward and says it how it is, you don’t get any of the bullsh*t.

“It is when you get fighters who think they are superstars who are not all they are made out to be, that is when you start getting problems.”

Who could he be talking about??
HILARIOUSLY HONEST

Hats off to Manchester heavyweight Lee Carter for his forthright and brutally honest take on the chances of him getting in the ring with Daniel Dubois.

In a hilarious interview with the online boxing channel iFL TV, the 34-year-old admitted the prospect of fighting the hammer-handed 20-year-old was, indeed, floated some months ago.

“I got offered Daniel Dubois about four month ago – I just put the f**king phone down!” revealed the former soldier. “The guy is a monster and, listen, I want serious dough to get in with that mother f**ker. I’d rather do sexual favours! I would.

“Not a f**king chance I am getting in the ring with that. I think he is going to go all the way, me. Him and Nathan Gorman.”

We think Frank’s matchmaker can take that as a ‘no’ then.
FLYING THE QUEENSBERRY FLAG

Sanjeev Sahota is more than happy to jump into the away corner for what he agrees will be a first major step up in his 8-0 career to date. 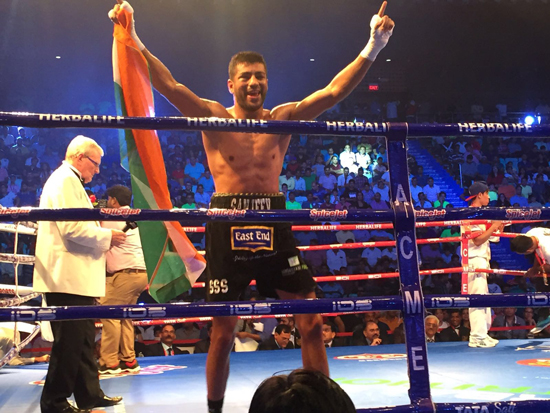 The 26-year-old goes in with the 6-1-1 Idris Hill on MTK’s Brentwood show on October 7. It is a leap of faith in more ways than one for the super lightweight, who has not previously traded against an opponent with a significant winning record.

Only on his voyage to India in July 2016 against former top amateur Vikas Kumar (1-0) has he encountered a foe with positive stats.

Not that this fazes the always likeable Sanjeev.

“I’ve got tunnel vision, I know where I want to be and I am taking this as it comes,” he reasoned. “The fact I have got a tough opponent just makes me train harder and sacrifice more to be the best I can be on the night.”

Playing away from home, so to speak, Sanjeev is accepting as a mission to be accomplished on behalf of his own team.

“I am treating it like I am going to war with my opponent and his team.

“I would rather be in fights where people say ‘that is a tough fight’ rather than people thinking I will win easily. If I was on a Frank Warren show I would know what everything was like, but I am going out of my comfort zone – the same experience as I had in India.

“I will be out of my comfort zone from A-Z, but that is what I want because I would rather be known as a warrior.”

Only a warrior without a particular affiliation.

“People call me a Sikh warrior, but I prefer to be one-nation because I am getting support from all over. I’ve got people coming from Spain, Belgium, Sweden, as well as England, Scotland and Ireland.”