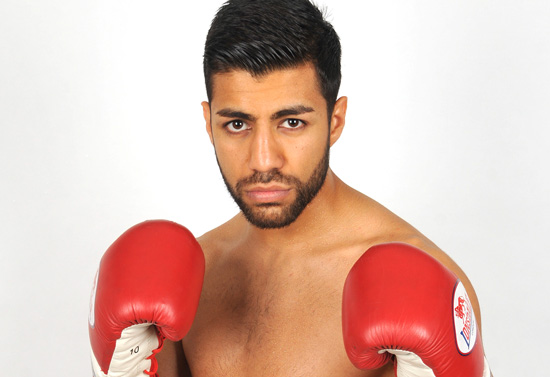 The 24 year-old from Emerson Park, Hornchurch, makes his highly-anticipated professional debut at the Harrow Leisure Centre on Saturday 2nd April, live and exclusive on BoxNation.

Hot-shot Sahota promises to wow crowds with his exciting brand of boxing and is thrilled to be teaming up with Hall of Fame promoter Frank Warren – the man who guided his childhood hero Ricky Hatton to global stardom. Hatton, a four-time and two-weight World Champion, was renowned for his ferocious all-action style of boxing and Sahota wants to emulate his hero’s style in the ring.

He said: “I want to be a Spartan in the ring. Every time I step in to the ring I’m going to leave absolutely everything in there. I’m a come-forward, aggressive, fighter like Miguel Cotto and Saul Alvarez, but Ricky Hatton is my all-time favourite. He was a true champion and a proper fighter. He never took a step back and never gave his opponents a moments rest. I’m truly blessed to have the support and guidance from everyone at Queensberry Promotions and I can’t wait to get started.”

Amir Khan’s phenomenal success has inspired a generation of young Asian boxers, but Sahota believes that more can be done.

He said: “I’d class myself as a gentleman outside of the ring. One of my main ambitions is to raise the profile of boxing amongst the Asian community. Amir Khan has been flying the flag in recent years but I’d like to see more kids getting involved in the sport. I’d love to inspire a new generation of British Asian boxers.”

SSS features in a four round contest in his opening fight and has been training in Murcia, Spain, under the watchful eye of Dominic Negus who also trains close friend Boy Jones Jr.

“Everybody dreams of becoming a world champion but for now all I’m doing is focusing on my professional debut. I can’t wait to get in the ring and show people what I’m all about. I have a great team behind me and I’m doing everything I can to ensure I’m fully prepared for the fight,” said Sahota.

He added: “I’ve been putting in the hours down the gym and I’m constantly learning from my trainer Dominic. Spending time out in Spain has allowed me to remain fully focused on my training as there are no distractions out there.”

Welshman Liam Williams headlines the show when he defends his British and Commonwealth Super-Welterweight titles against Rotherham’s Nav Mansouri.

Chief support on the card sees Belvedere’s George Jupp, fresh from his massive upset of Mitchell Smith in December, make the first defence of his WBO Intercontinental Super-Featherweight title.

Asian boxers are the new powerhouse in the sport and a strong contingent led by Indian superstar and Olympic Bronze Medalist Vijender Singh, plus hot Acton flyweight prospect Prince Patel, the professional debuts of amateur stars Sanjeev Sahota from Romford, and the Prince Naseem Hamed prodigy from Staines-upon-Thames Tony Bange.