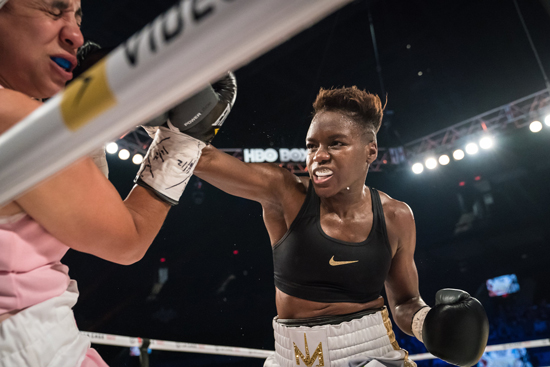 Nicola Adams OBE ended the year in style with an impressive third round TKO win over Soledad Macedo on the undercard of Billy Joe Saunders’ successful World Title defence against David Lemieux at the Place Bell in Laval, Quebec.

Adams hadn’t fought since May this year after making her professional debut a month earlier, but showed no signs of ring rust as she improved her unbeaten record to 3-0 (2 KO’s)

The Uruguayan was no match for Adams as the two-time Olympic champion powered past her opponent in the third round with a barrage of ferocious punches.

Immediately after the fight Adams set her sights on a World Title shot next year, but also revealed the reason why she took some time out from boxing.

“I’m really pleased with my performance,” Adams told BT Sport afterwards. “I was just happy to be back in the ring again and performing. I took a little bit of time about because I found out that my mum has cancer. I took a little bit of time out to stay with my mum but she wanted me to get back in the ring and training. She said the best thing for me to do for her would be to win a World Title.

“I really wanted to make a statement and I feel like I did that tonight. I’m hoping for a lot more fights in 2018 and hopefully a World Title shot at the end of the year.”