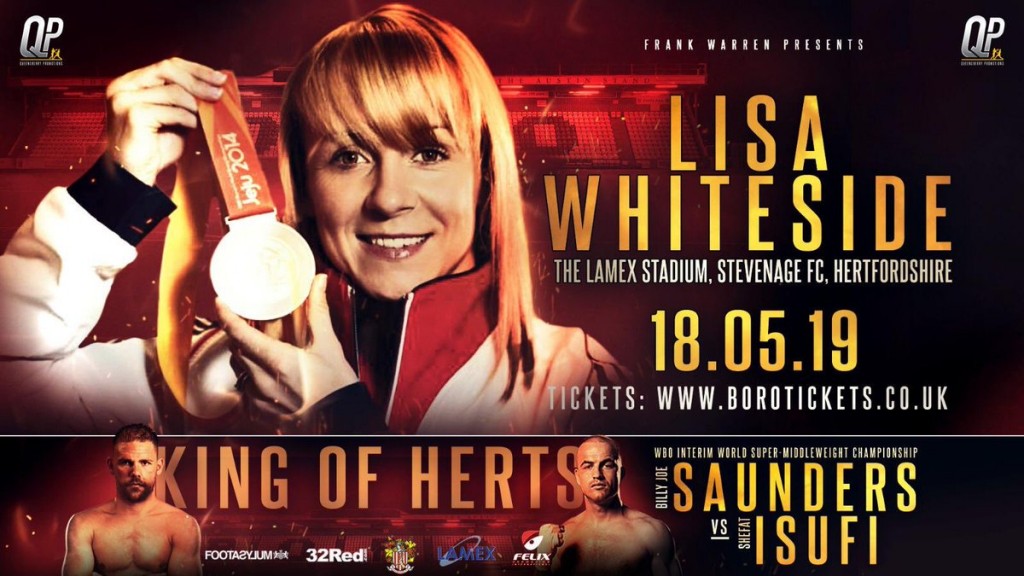 WHEN LISA WHITESIDE embarks on her professional voyage, with the first stop being Stevenage FC on May 18, there is one port of call – or rather person – she cannot wait to encounter.

Nicola Adams OBE is the primary name on the radar for the 2018 Commonwealth Games gold medallist, who is also a seven-time national champion and silver medallist at the 2014 world championships, having won bronze at the 2012 edition.

But it is missing out on the chance of selection for the 2016 Rio Olympics that gnaws away at the 33-year-old flyweight from Chorley.

The veteran of over 140 amateur fights – with roughly only 15 losses – admits she has an Olympic score to settle with the Golden Girl, Adams, who denied her a place at the 2016 Games in Rio by withdrawing  from a qualification contest.

“My weight is the same as Nicola Adams,” explained Whiteside on her Olympic omission.

“We should have boxed each other before the last Olympics but she pulled out. Hence why we need to have that fight in the pro game, don’t we?” suggested the professional newcomer, who was asked whether she now considers Adams as a teammate, friend or rival.

“Rival,” responded Whiteside, who intends to play catch-up on the soon-to-be world title challenger. “The main thing now is to be fast-tracked because I want that fight and so does my management team and I am sure the public, as soon as possible.

“It is a fight that never happened that should have. It would be a War of the Roses fight and would be fantastic.”

“I could have stayed on the GB team for Tokyo 2020 and I had the No.1 spot, but having the Commonwealth gold made me feel like I had done enough in the amateur game and happy to finish on a high.

“I didn’t want to miss out on the opportunity of the pro game and I felt it was the right time to go. I am not a big-headed person, but I do believe that I can become a world champion.”

Whiteside admits the prospect of turning professional was not on the horizon when she first sported the gloves, but with the popularity of the women’s game increasing all the time, she believes her entry is perfectly timed.

“It wasn’t really there when I started boxing, but after the Commonwealths I just felt like I had outgrown the amateur side and seeing how open it is now, with the publicity and liking for female boxing, I thought ‘wow, the pro game is my style’.

“My super-strength is my fitness and power, so to do it in the pro game with eight ounce gloves and no head guard is just going to suit my style.
“After the games I thought it was the right time to give this a dabble.”

Tickets for Billy Joe Saunders v Shefat Isufi, with Joe Joyce v Alexander Ustinov in chief support on May 18th can be purchased via borotickets.co.uk and are priced as below: