Adeleye added to the heavyweight mix 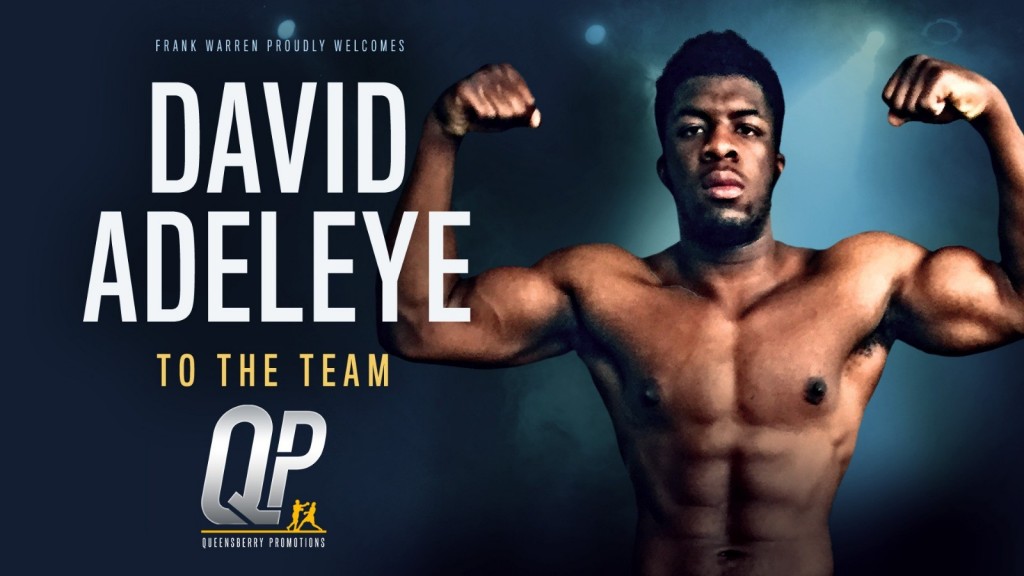 AHEAD OF THE weekend when Frank Warren brings his ‘Heavy Duty’ card to the o2 Arena, the Hall of Fame promoter is ready to further add to the heavyweight mix with the signing of top prospect David Adeleye to his ranks.

Adeleye is set to turn professional having enjoyed a successful stint in the amateurs, which he combined with his studies at the University of Wolverhampton, from where he graduated last year with a degree in Business Management.

The Londoner was a Junior ABA champion in 2013 and won the Senior ABA Novices in 2017 before winning the Senior ABAs the following year. He also represented England in an international against Denmark in 2018, also winning gold at the British Universities and Colleges Sport Boxing Championships.

Adeleye firmly believes his professional career has been placed in the right hands following his alliance with Frank Warren, who already has top heavyweights Daniel Dubois, Nathan Gorman, Joe Joyce and Jonathan Palata on his books as well as, of course, lineal world champion Tyson Fury.

“I am humbled and grateful to join such a highly-ranked promotional team, which is one of the best in the world,” stated the 22-year-old with experience of 30-plus amateur fights. “Frank has got Tyson Fury, Anthony Yarde, Dubois and Gorman, so it is great time.

“English boxing is at an all-time high and joining this stable now is pretty much perfect timing,” he added, before taking up the story of how he combined left hooks with lectures.

“I was juggling boxing and Uni at the same time, but I got it done because I want to be the best I can be. It was very hard because you would wake up in the morning and go to your lecture, then you would have to train again and have to get up even earlier the next day to do the jogging.

“I lived in the Uni halls as well and there were a lot of students partying, but I knew when to do what and I got through it. The educational side of things I knew would only be temporary and my boxing would be a long term thing, so I got it out of the way so I could focus solely on the boxing afterwards.

“For the last year I have been preparing for this and working with Hughie Fury, who I helped for his fight with Sam Sexton and again for Kubrat Pulev. I also sparred with Dereck Chisora for his fight with Dillian Whyte in December, but I then picked up a small hand injury that set me back a few steps.

“I’ve carried on training and I boxed in February – stopping the kid in the second round – before visiting a hand specialist to see about my injury. Everything is good now and I will be back knocking everyone out as soon as.

“I would say I will be moved along at about the speed of Daniel Dubois. Although I am not fussed who I fight, I know my lane and I am not in a rush. Frank will know the best timing and has the most experience of anyone in this game.

“He will know from the way I box the progression I should be making. I like what they have done with the likes of Daniel Dubois and Nathan Gorman, so Frank knows what he is doing with heavyweights.

“It is a great time to be a British heavyweight and I can’t wait to be part of these rivalries and dust-ups.”

Frank Warren added on his new signing: “I was determined to add David to our squad of hugely talented young fighters. I’ve seen him, he is exciting, he can punch and I think he will be a fantastic addition to the heavyweight scene.

“David is another top young heavyweight coming through, so I am happy to have him with us and I am looking forward to him making his debut and seeing him become part of what is happening with the heavyweights now.

“In a couple of years, hopefully he will be up there and ready to be part of a fight like we have got this weekend between Daniel and Nathan.”