After a year on the sidelines nursing a delicate left hand, rising Anglo-American prospect Adrian Gonzalez finally returns to battle at Manchester Velodrome this Saturday, hoping that the 2015-16 campaign will bring a belated title opportunity. 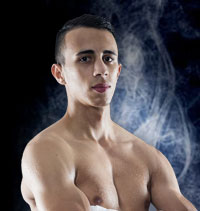 The California born, Manchester raised super-feather turned pro in the US, aged just 17, and seven years on boasts impressive 10-1 stats.

Adopted son to leading British coach Lee Beard, the ex California Golden Gloves finalist never looked better than when he rose from a first round knockdown to destroy Welshman Mark Evans (9-2-1) inside three rounds in his last gig at the Phones 4u Arena 12 months ago.

‘I started well and was battering Evans, hurting him to the body every time I touched him,’ recalls the 24 year old who meets Hungary’s Gyula Tallosi over eight rounds in his comeback this weekend.

‘However, I got complacent, launched a wide right hook and Mark beat me to the draw with a left hook over the top, when I was off balance. It was embarrassing more than anything.

‘But I showed grit and determination to get through the round, then kept him on the end of my jab, and turning, in round two. He flew at me but was soon spent and, in the third, I planted my feet, touched his body and destroyed him.

‘Most associate me with speed and skill but I proved I could fight that night. Mitchell Smith stopped Evans controversially. I knocked him out, head over heels. It’s a real shame it wasn’t televised.’

It was only the second stoppage of Adrian’s 11 fight career and came at a cost.

‘I’ve had problems throughout my career with my left hand,’ he disclosed.

‘Basically, I wasn’t giving it sufficient time to recover between fights. I was struggling hitting hard heads with those little eight ounce gloves on.  Unfortunately I broke it again in the first round of the Evans fight. I’ve stayed away to allow plenty of time for it to recover properly.’

Thus far, this solid all rounder has averaged less than two fights per year as a pro. However, capitalising on his father’s global connections, young Adrian has profited from an extensive ring education at some of the premier fight gyms on both sides of the Atlantic.

‘As we still live together, dad’s constantly got his eye on me but it’s all I’ve ever known. BoxNation is on non-stop in the house and we talk boxing all the time,’ says Gonzalez whose biological father is Mexican.

‘There’s no added strain. Lee’s a great pad man and great defensive coach. He doesn’t accept his fighters taking clean shots, says you never get paid enough to get hit.

‘He’s a perfectionist with a very keen eye who picks up on every flaw but good habits are drilled into you. It pays off in the ring on fight night.

‘Though I’ve not fought for almost a year, I’ve still been developing at gyms in England and the US under my dad. I’ve been sparring kids like Jack Catterall, Joe Costello, Raza Hamza, all very talented unbeaten guys in their own right.

Gonzalez is in a prime position to assess the training philosophies from both sides of The Pond.

He says: ‘The US gyms are big on the art and craft of the game; skills and defence. The Yanks preach not taking many (punches) whilst getting off with their own. They tend to fight at a slower pace.

‘In Britain, the emphasis is more on fitness and attacking ‘face first’. Everybody wants to be a Ricky Hatton. But sometimes the tempo that Brits set surprises the Americans. Judges tend to favour the aggressor. Hopefully, I’ve a mix of both sides.’

As a fresh fight season dawns, the Manchester City fan warns us to expect a more explosive model.

‘Recently, we’ve worked on slowing my feet and putting maximum power into shots,’ he claimed.

‘People seriously underestimate my power. Fighting the journeymen, you can get bored and the fights are short, four or six rounds.

‘I’ve got great defence, can slip and catch shots. Now, as I  step up against better kids who come to win, I can counter off their attacks, dismantle them and stop them late, in longer fights.’

For Saturday’s comeback, he steps up to eight rounds for the first time. He confronts a 27 year old who is undefeated in all of his eight fights in Hungary (with five early nights) yet has been halted inside four rounds – albeit in good class – each time he has left the motherland.

‘I’ve only completed one six rounder but my style is perfectly suited for longer fights,’ insists Gonzalez.

‘I’m very relaxed and do 10-12 rounds straight off easily in the gym. I live the life and I’ve the mindset to dictate the tempo. I was never going to be at my best in four round sprints.

‘The left hand now feels as strong as ever so, hopefully, I can move on to a title fight of some description before the close of the year.

‘On Saturday, I intend to look good before all my local fans. I’m expecting a short night.’