The tennis great Jimmy Connors once suggested that two orang-utans having a knock-up would still attract a capacity crowd on Centre Court at the All England Club – the arena in SW19 that also echoes with applause when an umpire calls for quiet or a pigeon eventually takes flight. 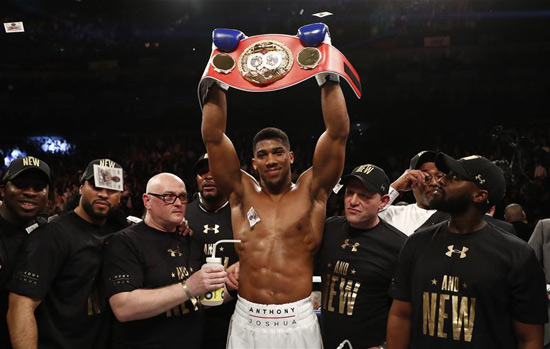 Much the same could now probably be said about bills topped by Anthony Joshua at the 02 Arena.

The American Dominic Breazeale is being served up as big Josh’s latest fall guy. The 30-year-old possesses an unbeaten record and apparently a bit of clout, given his 15KOs from 17 bouts, but there are no big-hitters from the heavyweight parade on his card.

In fact, Breazeale’s card was nearly marked last time out when he was floored by Amir Mansour in the third round before the man from Delaware declared on his stool three rounds later.

On the face of it, Breazeale is actually ideal fodder for Joshua’s continued development, with the pair having very similar levels of experience and yet to taste defeat. But, as I’m sure we will be regularly reminded, this is for a world heavyweight title. Once you take the plunge into the deep end, you shouldn’t go fishing for opponents at the shallow end of the IBF rankings and claim to have landed a big one.

Of course, it is a first and voluntary defence, and neither his promoters or TV paymasters want to risk him getting beat, but pay-per-view fights – as we presume this will be yet another – should be premium contests justifying the punters shelling out for on top of their monthly subscriptions. I don’t anticipate Joshua topping up his 34 rounds to date by many on the night.

Don’t get me wrong, Joshua is an exciting prospect and we all know what he is about, which is why thousands who don’t closely study form will doubtless flock to the venue that has become the Olympic champion’s own Centre Court.

To place the challenge of Breazeale into context, his last but one fight was against Fred Kassi, who BoxNation viewers will see firsthand when he takes on young Hughie Fury at the Copper Box on Saturday.

Kassi extended his fellow American to a full ten rounds and I understand the margin of victory was not as wide as the scorecards might suggest.

So Hughie, just 21, now fights the fella Breazeale defeated only last September to continue his learning curve, with the points winner somehow now qualifying for a shot at a world title. Go figure that out.

Joshua has yet to be tested, the only one to fight back so far has been Dillian Whyte in a scrap for the vacant British title. If you are a champion you should be ready and willing to take on all-comers and mix it with the elite, as opposed to carefully selected opponents.

Perhaps Joshua – or more likely his people – need to grow a pair. As they say on Centre Court, ‘new balls please’.