I have wracked my brains, but I can’t come up with a world-renowned boxer from the past named Liam, can you?

It is certainly not a familiar moniker in the fight game even now but suddenly, like the proverbial London bus, three come along together. 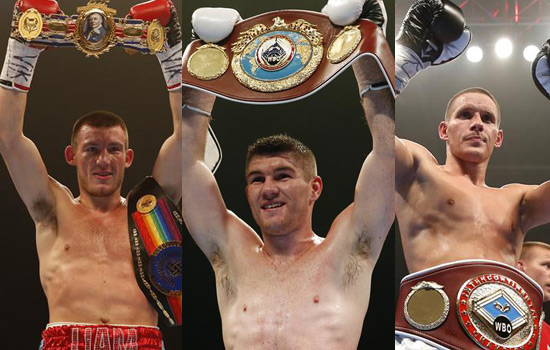 One, Liam ‘Beefy’ Smith is already a worthy world champion and I confidently predict both Liam Walsh and Liam Williams won’t be far behind him.

Indeed, Smith and Williams, one day could well end up fighting each other.

I’ve always thought that Liam Smith was the best of the four Liverpool brothers.

Loyal Liam has been with us from the start of his pro career and we’ve stuck with him – now he’s a world champion, and a potentially great one.

He deserves to be up there in the top echelon of super-welterweights because he is cool, capable and has a steely determination, hunting his opponents down with a chillingly disarming smile.

He is a real quality operator who fights rather like a Mexican.

Eventually I see him going up to middleweight and who knows, maybe there will be a stupendous fight there with Billy-Joe Saunders.

Ryan’s eldest brother Michael is also unbeaten at featherweight winning all 11 bouts by stoppage or ko. Some family eh?

This Liam is a superb boxer who should have fought Ricky Burns some years back, but was injured in a car crash, which was a great shame because he was quite capable of beating Burns at that time. He will fight for a world title this year, make no mistake.

Liam Williams, as we saw in Manchester last month, is one of the best bangers in the business.

When the 23-year-old Welshman added the British superwelterweight belt to his Commonwealth title by blasting out Kris Carslaw in two rounds he was fighting for the first time in 13 months after overcoming a career-threatening broken hand.

Wisely, Williams wants to wait a bit before launching a world title bid.

As his excellent trainer Gary Lockett emphasises, he’s only had 14 fights and has not been beyond eight rounds. But that’s testament to phenomenal knuckle-power.

Fans at the Liverpool Echo Arena and BoxNation viewers can again witness his explosiveness for themselves when Williams defends those titles against the redoubtable challenger from Rotherham, Nav Mansouri (15-1-2) on our massive February 13 ‘Tale of Two Cities’ bill featuring Terry Flanagan against Derry Mathews.

Gary Lockett has done a tremendous job with him, as has Graham Everett with the super-charged southpaw they have dubbed ‘Destiny’, up in Cromer.

By the end of the year Walsh should be well on target for his own world title tilt.

By coincidence, all three of the Liams have had stop-start careers because of hand injuries, but now all are finding their rhythm again.

Incidentally Liam is a derivative of the old Irish name Uilliam (the Gaelic version of William), which means ‘strong-willed warrior.’

In all three cases, that fits the Bill, you might say.

In Frank’s Scrapbook tomorrow: Why drugs are becoming the bane of boxing