AGAINST ALL ODDS FOR TOMMY 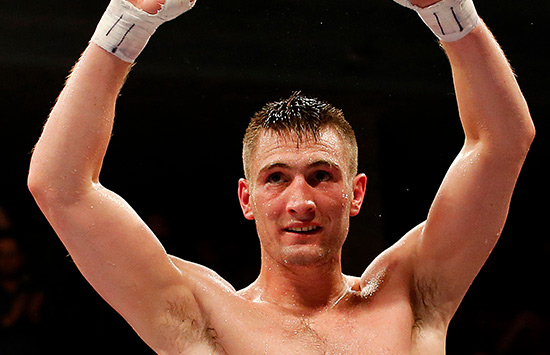 According to the odds, Tommy Langford is well and truly up against it on Saturday when he steps into the ring to contest the WBO Interim world title against the stocky force of nature that is Avtandil Khurtsidze.

The Baggies Bomber has no objection to being ranked as the outsider, in fact he prefers it that way.

A little sweep of the betting sites tells us the 32-2-2 Georgian is rated as the 8/15 favourite, with Langford coming in mostly at 7/5. Don’t be telling Tommy that the bookies are rarely wrong though.

Langford, naturally, takes the positives from not being the fancied fighter, pointing out that the weight of expectation will sit squarely on the shoulders of his largely avoided opponent, who is on a nine-fight winning streak since dropping a points decision to Hassan N’Dam N’Jikam.

The North Devon exile simply believes his time has come and he is ready to take a leap into dangerous waters.

“Yes, it all goes back to the opportunities thing and I’ve always said I will take them,” he considered. “I am almost better being the underdog, there is almost no pressure on me in this fight.

“Although I am in front of home fans and all this sort of thing, there is no expectation on me. The only thing I have do is win and beat Khurtsidze. That is all that is going through my mind and I believe I can beat him.

“What you have got to look at is, obviously he is very strong, very avoided and hasn’t fought for a year. Is that because nobody will fight him? They could have thought his win over (Antoine) Douglas was a bit of a fluke and wanted to keep him for a big fight.

“I don’t know which way you want to look at it. Is he old, or is he experienced? He has been at world level and lost to a world name in Hassan N’Dam.

“So you’ve got to say he has got these things on his side, he can punch and he is very, very strong, but what he doesn’t have is my boxing brain.

“You cannot look at our two styles and say he is a better boxer than me. He is not.”

Langford knows that if he enters into a brawl with Khurtsidze he is more than likely to come off second best. He will enjoy physical advantages over the 5ft 4” 37-year-old and needs to employ them. Getting cornered or constantly caught on the ropes is not an option.

“It is the overriding factor, I have to outbox him,” insisted the unbeaten British champion. “I have to do a job and I know what I’ve got to do. I’m so confident in what I’m doing, I have delivered it in the gym already and it has been a case of polishing it all up over weeks of sparring and then doing it on the night. 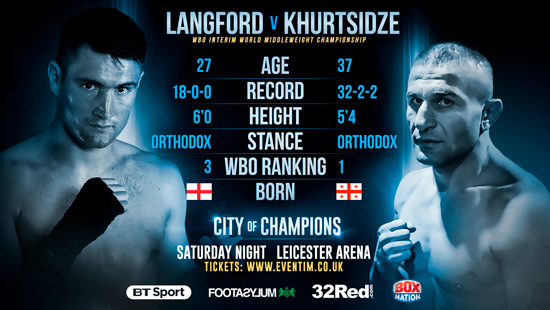 “When the night comes around it will be ingrained in me and second nature,” he added, while pointing out he has no plans to box on the retreat.

“I’m not in there to back off him, I am going to take it to him and I am really looking forward to this.

Fighting a fearsome opponent like Khurtsidze for a world belt is the breakout fight Langford has been waiting for, one where he can make his mark on the global stage.

He was denied a marquee fight of sorts last time out when his mandatory challenge for the British title belt was not reciprocated by the then champion, Chris Eubank jnr.

It is now not a subject Langford likes to dwell on too much.

“Yeah, let’s not talk about him too much because this is about me really!

“I’m not fortunate enough to have a famous dad and I haven’t had easy touches – all I’ve done is taken what’s been offered to me. This fight got offered and I took it.

“You’ve got to do what you’ve got to do and, if the fight is there, no matter how avoided, hard or tough he is, you got to take that chance and I believe I will come through.”

Next time: Langford on why this is a fight that cannot fail to deliver the goods