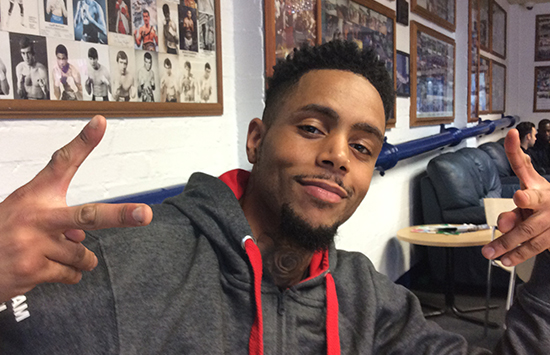 FIGHT FANS WHO follow the game closely and track the fortunes of our home grown prospects and contenders have quite possibly asked the same question at some point this year. Whatever happened to Ahmet Patterson?

The fleet-footed former street dancer, you will remember, was all set last December to head across to Cardiff for a fascinating British title scrap with the champion Liam Williams.

The much anticipated super welterweight contest between the two then unbeaten fighters was aborted at short notice after Patterson was victim of a street attack while out on an evening run that left him with facial injuries and forced him to withdraw from his mandatory challenge.

Images of his cut and swollen face were circulated at the time, but there was no word from ‘Punch Picker’ then or since. Until now.

Patterson literally dropped off the boxing radar, ceased training and was not heard from by his team at the Peacock Gym in Canning Town.

“I am trying not to go back there, but go on,” he responded when we pinned him down for a catch-up now he has recaptured the boxing bug.

“Basically I was not running towards them, they were coming towards me, but I didn’t think anything of it because I had headphones on and couldn’t hear what they were saying.

“They put their hands up threatening to stop me so I took my headhones off and said ‘what’s up?, what’s up?’ and one of them grabbed on to me, so I pushed him off. Another one came towards me and it was my natural reaction to kick him in the chest, then the next one threw a brick at the side of my face.

“I knew it was a brick after and was going to fight back, but then they ran off and there was a brick on the floor. I looked at my face because it was pulsating, so I looked in a car window and my face was coming up.

“That was what happened and it soon dawned on me that I was out of the fight.”

Williams proceeded to take the WBO European belt against late replacement Gabor Gorbics and has since challenged for the Interim world title against Liam Smith.

Ahmet, meanwhile, was fighting his own demons in the wake of the unprovoked attack.

“I then went through a rough patch at the beginning of this year. In January and February I was down, I’ll be real about it, I was very down and in a bad place because I felt like something had been snatched away from me.

“It was a good fight at a shot at a title to be British champion. It got taken away and I was down. The only person to get me back was me.

“In the mind I was angry and I got depressed with it,” he added, also revealing the proximity of the facial damage to his eye contributed to his extended hiatus from the sport.

“I parked it because I got hit with a brick and I had medical issues before with my eyes. It kind of brought it back when I got hit.

“These kind of things are obviously serious and you have to take notice of them.

“I went back to the specialist and he told me it was a six to eight months recovery again because of damaged nerves.

“That again got me a bit down because I wasn’t going to be fighting again for a while and it put me in a dark place.”

More from Ahmet on his comeback plans next week

ON THE BASH AT BT SPORT 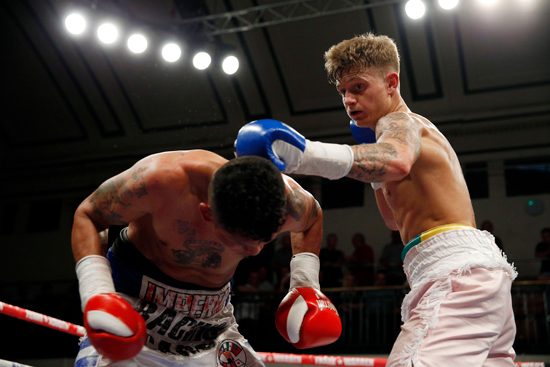 Archie Sharp was top of the pile for a short time on Thursday when BT Sport wheeled out their punchball machine before the final press conference for the weekend show at the Copper Box.

Unsurprisingly, Anthony Yarde was heading the leaderboard from a previous bash at the BT Hardest Hits challenge, but Archie pulled a big one out of the bag and registered a score of 799 to become the new leader.

That was until your correspondent mischievously chose to gently point out to Anthony that he had been topped by a super featherweight.

With that, the light heavyweight promptly marched over to where the machine was stationed, demanded a further go and, with a single hit, restored himself to pole position with a score of 817.

ON THE SUBJECT of the now 13-0 thunder-punching Yarde, he flatly denied he was becoming a bit diva-ish when requesting use of his own ring for the media workout at the Peacock Gym on Wednesday.

The main area of the Peacock houses two rings – one blue, one red – and the blue ring was appropriately furnished with dressing to promote BoxNation’s coverage of the big Golovkin-Canelo coming together from Las Vegas.

The undercard fighters, as well as world champion Billy Joe Saunders, all did their bit in front of the cameras in the blue ring, before the dressing had to be switched to the red ring for the final workout involving Mr Yarde.

“No I wasn’t,” pleaded Yarde to the diva charge. “They asked me what ring I wanted to use so I said the one I always train in.”

Nothing to do with it being Arsenal red then?

“Yeah, that must be it,” he added in an attempt at further mitigation…
WHO SAID WHAT?

“The world’s eyes are on boxing for good reason and some judge has to go and f**k it all up.” Carl Frampton neatly sums up the feelings of many when Golovkin-Canelo was deemed to be a draw

“Was this your work @AIBA_Boxing???” Michael Conlan puts his spin on the outcome of the scoring in Las Vegas

“Had a meeting with my manager today. I have had some AMAZING news. I can’t announce the opponent for a couple of days but it’s a huge fight for a top title. You’re going to love it!!” Mark Heffron teases his fans ahead of his return to the ring in Newcastle on November 11

”When I get my license back and I get fit again and I get this five stone off – what did Schwarzenegger say? ‘I’ll be back’.” Tyson Fury revises his retirement plans once more

“The only way I would take that Brook fight is if he left Eddie Hearn. I just don’t like Eddie Hearn, I think he’s very disrespectful and he’s never come clear with me.” Amir Khan lays down the ground rules for a fight with Kell Brook ever coming to fruition