The night I fell in love with boxing

It was the fight that first whetted my appetite for boxing and created a passion for the sport which has lasted a lifetime.

On a nail-biting summer’s night in July 1951, as a 13-year-old schoolboy, I rushed through my homework and was allowed to stay up and listen on what we then called the wireless to fistic history being made as Britain’s Randolph Turpin sensationally won the world middleweight title from the sweetest scientist of them all, Sugar Ray Robinson.

Some 64 years later, and after following fight game through hundreds of memorable, and some equally forgettable, encounters from Atlanta to Zaire, and covering a dozen Olympics and numerous World Cups, it remains firmly lodged in the consciousness as one of the epic sporting moments.

When Randolph Adolphus Turpin, aka the Leamington Licker, born of a Guyanese father and British mother, had his hand hoisted as the victor after 15 pulsating rounds by British referee Eugene Henderson, the sole arbiter, the newsreels (there was no TV coverage of course) subsequently hailed it as “The Supreme Fighting Sensation of All Time.”

It is true that Sugar Ray had something of an off-night, but at 31 he was at the peak of his career, having lost only once – to Jake La Motta- in 139 previous contests. It was also his first defence as world middleweight champion.

This was the seventh and final fight of Robinson’s European tour in as many weeks. The other six fights were non-title affairs which took place in France, Switzerland, Belgium, Germany, and Italy where it was said Robinson barely bother with training, playing golf through the days, and at card tables late into the nights. He clearly took the British champion Turpin too lightly.

Yet this was the real Robinson, not the ring-worn shadow of a once great warrior who came back to London 11 years later in his forties to lose to another former British world middleweight champion Terry Downes, and three years after that to Irishman Mick Leahy in Paisley as he slid ignominiously into the world of has-beens.

You may think boxing is big in today’s Mayweather era – or was when Muhammad Ali bestrode the world. Well you should have savoured it when Sugar Ray was in his pomp. 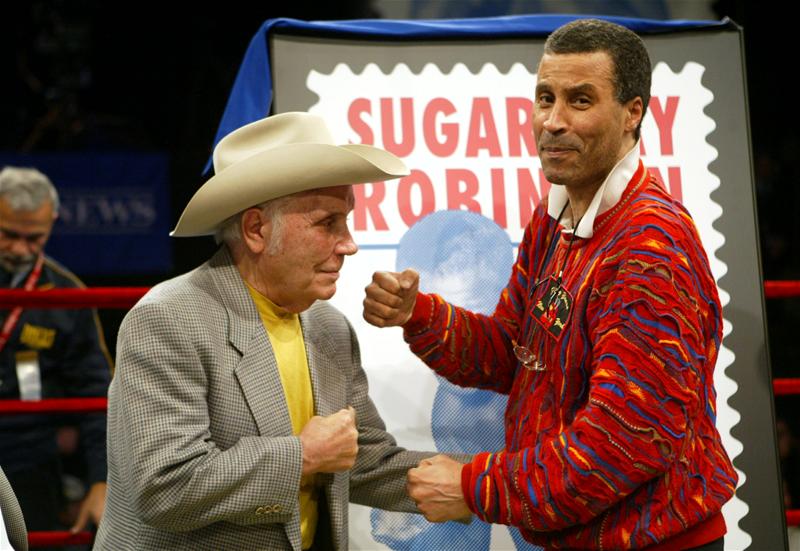 As he arrived for the weigh-in for the Turpin fight thousands thronged  Piccadilly Circus and outside the Great Windmill street offices of promoter Jack Solomons, bringing traffic to a halt.

His Sugarship, as he was known, had an entourage which included his personal hairdresser, masseur, golf pro, secretary, manager, voice coach and a coterie of trainers and beautiful women. Plus a midget circus clown who was his on-tap court jester.

Robinson turned up a pink Cadillac coupe, shipped from the United States.  His 23-year-old opponent had come by underground.

From the images I have seen of the scene the only comparison would be when Ali retuned from exile to fight Jerry Quarry in Atlanta. Ali was trailed through the streets by hordes of kids, like a Pied Piper, and fight night resembled a crowd scene from Porgy and Bess.

But even the greatest self-publicist the sport has known admits that he was in awe of the Robinson razzmatazz. And of him as a boxer, calling him “the king, the master, my idol.”

But that night of 10 July 1951 was not to witness Robinson’s finest hour. Yet the nation, riveted as was this teenager was by the radio commentary, had no idea that Turpin was actually winning. Both the celebrated ringside commentator Raymond Glendenning and inter-round  summariser W Barringtion Dalby gave the impression that Robinson was well ahead- so much so  that questions were later raised in parliament about their impartiality, or credibility, in describing the bout.

But the 18,000 crowd packed into Earls Court had no such doubts. When Turpin was rightly declared the winner, with no dissent from the Robinson corner, they stood in unison to sing ‘For He’s a Jolly Good Fellow.’

That euphoria, which lifted the mood of the nation in times of  post-war austerity – there was still rationing – was to last only 64 days  with a chastened Robinson regaining the title by stopping Turpin in 10 rounds before a crowd of 61,370 at the Polo Grounds in New York..

Although he fought on with varying fortunes  for 13 years  Turpin never dealt with the eventual obscurity resulting from the loss of his crown, ending up in the wrestling ring, and after being declared bankrupt, committed suicide by shooting himself in 1966.

It was reported that, on the same day, he tried to kill his one of his four daughters, Carmen, aged four, who was taken to hospital two gunshot  wounds.

After making an estimated $4 million in the ring (how ironic that Mayweather, the only man in the world who believes he is better than Sugar Ray, made more than that every single minute against Pacquiao) Robinson also spent himself into penury by the mid-sixties.

Then he reinvented himself by getting into show business as a song and dance man. But he will always be remembered for the music he made in the ring. “He boxed as though he were playing the violin,” American sportswriter Barney Nagler observed.

On a BoxNation’s Boxing Matters earlier this year my fellow scribe Colin Hart and I both nominated Robinson as truly the supreme boxer in history. No argument.

And so say all of us.

He is 94, which makes him boxing’s oldest surviving world champion, a title he has inherited from Germany’s Max Schemling who was just seven months short of his 100th birthday when he died in February 2005.
Robinson and La Motta duelled a total of six times, Robinson winning five.

”I fought Sugar Ray so often, I almost got diabetes,” LaMotta famously said.

The last time he and Robinson met outside the ring was in 1986, when, in one of his last public appearances , Sugar Ray was best man at one of La Motta’s six weddings Six wives?  Maybe that’s the secret of the Raging Bull’s longevity!

Raging Bull, the steamy story of La Motta, as graphically portrayed by Robert de Niro is one of boxing’s celluloid classics – arguably the finest of all.

Other contenders range from The Harder They Fall to Rocky I to VI (aka Rocky Balboa) via Somebody Up There Likes Me, Body and Soul, Champ, Golden Boy, Fat City, Hurricane, Warrior, Million Dollar Baby, The Fighter, Cinderella Man, When We Were Kings, and that unlikeliest pugilistic pastiche, Grudge Match, which saw one-time rival warriors Sylvester Stallone and De Niro settle old scores in the ring as near-septuagenarians.

More raging bullshine than Raging Bull but like most boxing movies, where every exaggeratingly pulled punch is choreographed and assiduously rehearsed, it rang a few bells at the box office

The screen’s glove affair continues this month with Southpaw, in which Jake Gyllenhaal plays a champion welterweight called Billy ‘The Great’ Hope, who stages an epic comeback from personal tragedy. To get fit for the role, Gyllenhaal worked out daily with Floyd Mayweather Jnr in Las Vegas.

The 34-year-old actor underwent intense training for eight months to gain the body and mindset of a fighter. His daily routine included flipping and hitting a 300lb tractor tyre and doing 1,000 sit-ups a day. Serious stuff.

Southpaw opens in cinemas here on Friday 24 July. I haven’t seen it but I gather it really does pack a punch.

World Boxing Council President Mauricio Sulaiman has expressed his desire to hold a competition between the current world title holders in order to crown one sole champion in each of the 17 divisions.

He says  the idea is still in its infancy, but that we wants the other organisations to at least agree to an initial tournament so that the fans can see who the best fighter currently is in each weight class.

Good luck with that one.