BoxNation viewers who stayed up through the night last weekend to watch the Timothy Bradley-Jesse Vargas fight from Carson, California – or caught the replays later – witnessed a moment that will go down in boxing lore as one of the sport’s biggest mysteries. One that would take a pugilistic Poirot to solve.

Like me, I expect most remain baffled at the curiously abrupt finale of the WBO interim world welterweight title bout which saw Bradley win by unanimous decision before the contest was even completed.

Having been staggered by a massive right hook from Vargas some 15 seconds from the end of the bout he was clearly winning, a stunned and reeling Bradley clung on to Vargas before apparently being rescued by arm-flailing veteran referee Pat Russell with seven seconds remaining.

Not because  the fight was stopped – but because the referee declared it had ended!

Everyone except the flummoxed official seemed to think Vargas had won by TKO. In fact Russell said he believed the bell had gone for the end of the fight. Yet no-one heard it apart from him.

Had he mistaken the ten-second warning clapper for the bell – or simply dropped a clanger?

“I made a mistake,” he admitted afterwards. “It a sounded like the bell to me It was an honest decision.”

British Boxing Board please note: Surely referees here should be allowed to explain debatable decisions too, for the sake of transparency, not immediately hustled away.

It was not the first time that ‘Desert Storm’ Bradley has had a controversial decision work in his favour. Remember that highly questionable verdict over Manny Pacquiao?

Inevitably conspiracy theories subsequently have arisen, with nonsensical innuendo that Bradley was ‘saved’ to preserve him as a potential opponent for Floyd Mayweather jnr’s next fight in Las Vegas on 12 September.

So who is Pat Russell?  It turns out the white-haired 67-year-old grandfather, a Vietnam vet and a retired special investigator for the District Attorney’s office in San Diego, is in his final year as a referee, a job he has been doing for half his life.

If it makes him feel any better he wasn’t the first to bungle over the bell. When light-heavyweight Matthew Franklin (later Matthew Sadd Muhammad) first fought Marvin Johnson referee Ozzie Saddler stopped a round early, apparently mistaking the 10-second alert for the end-of-round bell. And Saddler was nowhere near 67.

Personally I believe that Russell, a bit of an old buffer – rather like me –  simply had a senior moment. Or perhaps he just suffers from tinnitus. 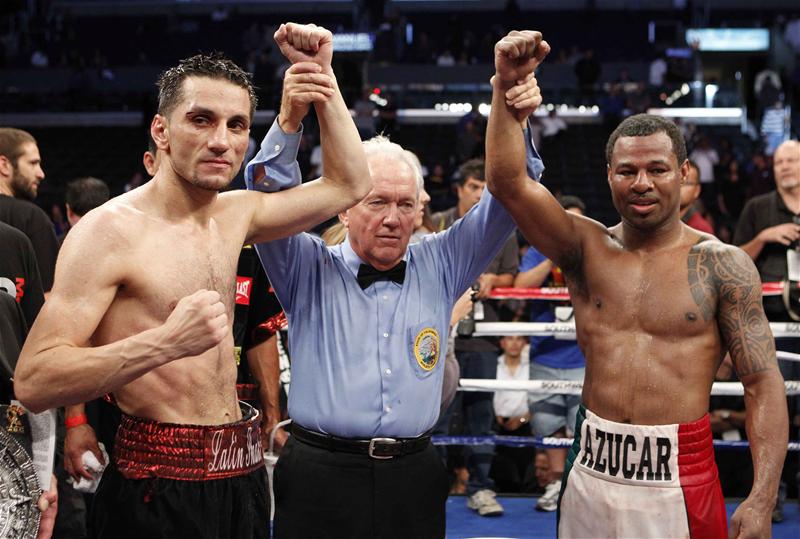 In for the count

Pat Russell is not the only referee to be in a spot of bother over a controversial non-count. Britain’s Ian John Lewis , an ex-pro and prison officer who became the youngest-ever Star Class ref at 37, must explain to the Board of Control his handling of the recent Rocky Fielding-Brian Vera bout in Liverpool.

The American appeared to have stood to await a count after clearly touching down – only to be met with two right hands and a thundering left hook from Fielding. Moments later, he was stopped.

If he can fight as handsomely as he looks, then Vijender Singh is set to be as big a name in the UK as he is in his homeland, India.

There the middleweight superstar, signed by Queensberry Promotions this week, is revered by a nation which has never staged professional boxing, for an amateur career which has seen him medals at the Olympics (his bronze in Beijing was the first-ever for India in boxing), Commonwealth Games, Asian Games and World championships.

At the media conference to announce his arrival on the British scene I asked the lady from The Times of India just how big he was back home. ”As big as David Beckham was here,” she replied.

As in football, there has never been anyone of Indian descent who has made it big in the pro game. But if Vijender can bend it like Beckham in the ring he will bring a bit of Bollywood to boxing and open up a whole new following from the huge Indian community in this country.

A serving police officer now on extended leave, he’s 29, late-ish to be turning pro, but that’s not even middle age in boxing these days.

The father of one from Bhiwani – when he married long-time girlfriend Archana in 2011 he is said to have ‘broken a million hearts’ – will now work with trainer Lee Beard in Manchester alongside a stable which includes Jack Catterall and Jamie Cox, and make his debut BoxNation in September.

Arrangements will be made to beam his progress in an initial six fight deal with Queensberry to a potentially massive audience on the sub-continent.

His manager, Neerav Tomar, MD & CEO of IOS Sports & Entertainment says: “This is a historic moment for Indian boxing. He’s a top fighter and is extremely motivated to train hard and perform. Vijender will be the flag bearer for a nation of over a billion people.”

That’s quite something to live up to. But Vijender certainly looks and talks the part. We await his fistic debut here with fascination. 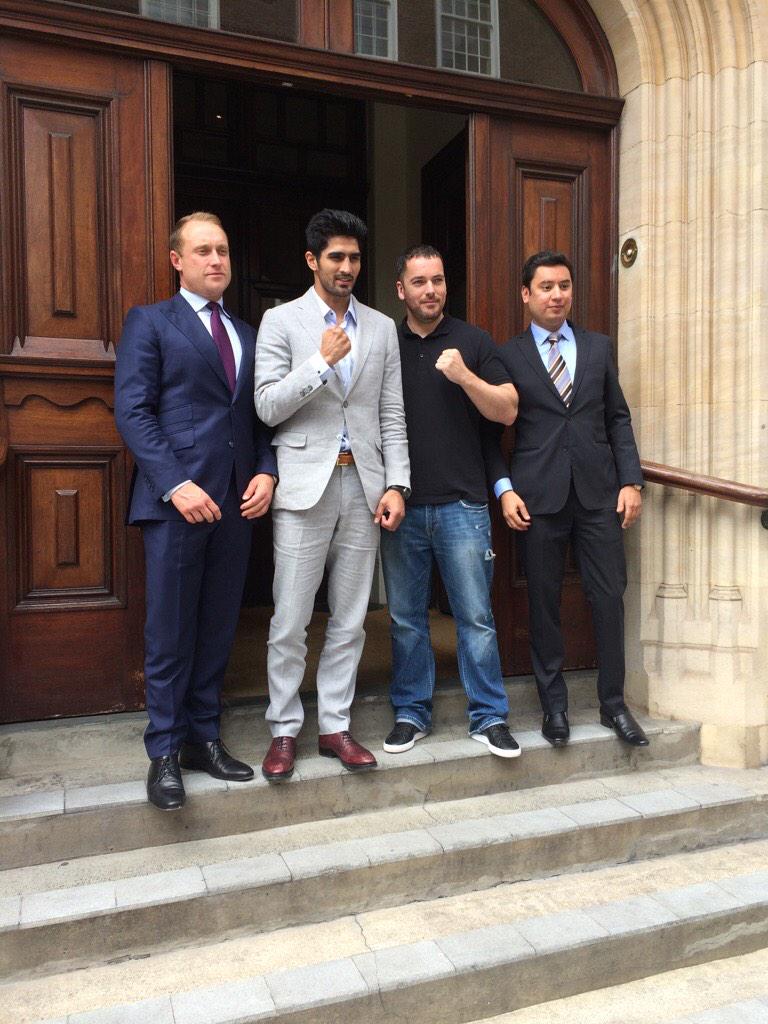 He may be 73 and ailing, but Muhammad Ali is still in there tweeting. His latest missive reminds us that it is exactly 40 years since he defeated Britain’s Joe Bugner in Kuala Lumpur, Malaysia.

I remember it well. Canny old Joe ducked, dived and dodged about for or 15 rounds, without winning one, never breaking sweat in a temperature even hotter than we have been experiencing here of late.

Afterwards he casually went for a swim before emerging from the pool to reply when asked what his future plans were. ”Get me Jesus Christ and I’ll fight him tomorrow.” Which drew a memorable growl from the inimitable scribe Hugh McIlvanny: ”Joe, you’re only saying that because he had bad hands.”

As McIvanney also opined, in his prime Bugner had the physique of a Greek statue, but he had fewer moves.

It is good news that ring legend Oscar de la Hoya has again changed his mind and decided, sensibly, to “stay retired.”

Wise move. He risked not only his reputation but his good looks had he made a comeback at 42.

But this does not mean he no longer has a big fight ahead of him. For De La Hoya’s Golden Boy has joined forces with Top Rank promoter Bob Arum in lawsuits against the new ring kingpin Al Haymon, claiming he and his affiliates have breached the Muhammad Ali Reform Act and other state and federal laws in his fight dealing which they claim are in danger of creating a monopoly.

Says De La Hoya:”I applaud Bob Arum and Top Rank Boxing for stepping up on behalf of fighters not only in their own stable, but all across the sport. Those like Bob and myself who have spent the bulk of their lives around boxing understand that the Muhammad Ali Boxing Reform Act is a crucial piece of legislation that serves to protect boxers and enhance the sport.

”Golden Boy Promotions will continue to push forward with our own lawsuit to ensure our wonderful sport continues to grow in a competitive, just manner.”

Golden Boy have filed a $300 million lawsuit against Haymon and his related companies. Octogenarian Arum is also claiming a minimum $100 million in damages for alleged irregularities by Haymon’s organisation which includes “ inducing professional boxers to enter unlawful ‘tie out’ agreements which prevent the boxers (whose interests Haymon purports to represent) from freely contracting with legitimate promoters; acting illegally as both a manager and a promoter and fraudulently operating in the promotion business through a network of ‘sham’ promoters.”

Haymon, who has assembled a stable of around 200 fighters under his Premier Boxing Champions umbrella, calls the allegations ‘baseless’ adding: “They’re entirely without merit and a cynical attempt by boxing’s old guard to use the courts to undermine the accessibility, credibility and exposure of boxing that the sport so desperately needs. The Premier Boxing Champions series makes boxing free again, by bringing championship boxing to free TV, with a fighter-first promise and a commitment to the fans to restore boxing to the lustre of its heyday.”

Ding, ding. This is one punch-up which seems set to rock US boxing to the core. Let’s hope we can all hear the final bell.