Boxing should be pleased as punch with the appointment of the new sports minister. Tracey Crouch, the 39-year-old MP for Chatham and Aylesford, is not only a fight fan but works out regularly in the House of Commons gym.

She says she is so keen she often has to dash to vote while still in her Boxercise gear whenever she hears the division bell.

Crouch says she went to her first fight at leisure centre in Gillingham three years ago to support local Chatham heavyweight Tom Dallas. “I had no idea what to expect. In was a bit nervous so I sat at the back of the hall but by the time the fight started to hot up I was right up there at ringside yelling my head off.”

Now she says she loves boxing and will do all she can to fight its corner in the House. That’s good news, because she also has an ally in another feisty female Tory MP who likes a good scrap and has been known to don the gloves and spar with amateur boxers in her Bristol constituency.

Charlotte Leslie is chair of the All-Parliamentary Boxing Group and has spoken of her passion for the sport at the Boxing Writers’ annual dinner.

In fact boxing has been quite well served in parliament. Among other sports ministers who were great supporters of the sport was Kate Hoey, as was Tony Banks.

I once asked the late Banks for his on-the-record reaction to a move by another MP to get punches to the head banned: On the record?” he responded. “It’s effing bollocks!”

Richard Caborn chaired the England ABA and Colin Moynihan, an Oxford boxing blue once suspended by the ABA for sparring with pros, served on the Board of Control.

So when it comes to political in-fighting, it is heartening to know that in the parliamentary ring boxing has a some defending champions who won’t be pulling any punches.

Naseem Hamed was in a magnanimous mood when he  attended a Boxing Writers’ Club lunch this week to honour his elevation the Boxing Hall of Fame. 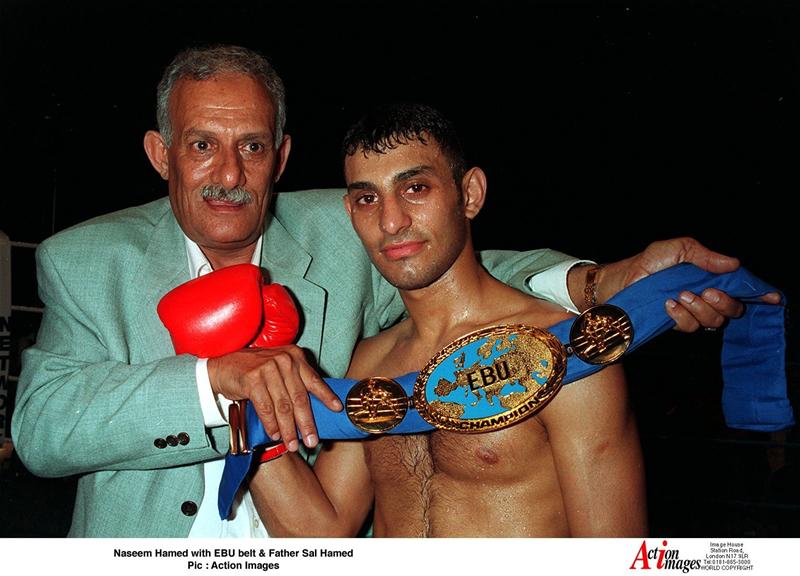 “If anyone should be in the Hall of Fame it is you,” he told the former three weight world champion. “In fact I think you should be up there instead of me. Let’s start a campaign to get you nominated.”

Naz rarely showed such generosity towards fellow fighting men when he was strutting his stuff during his egocentric magic carpet ride. But he has certainly mellowed in his 13-year retirement, while remaining a keen observer of what is happening in the game, and has no envy of the mega-money now available to his successors.

Hamed believes Floyd Mayweather “deserves every penny he earns” and adds: “I just feel proud when they say in Forbes magazine that the highest paid athlete is a fighter. I love that. That does it for me. I’ve always rated him and always thought he was number one.” But he snorts dismissively when talking about the fight with Pacquiao.”It was rubbish”.

He says he understands why Amir Khan is holding out for Mayweather, and believes Khan may give the American “a harder fight than his last ten opponents”, but he also adds “I want to see him fight Kell Brook in an all-British bash at Wembley. I just don’t see why Amir is overlooking Kell Brook. You’ve got a world champion on your doorstep with a legitimate belt in your weight category. People in this country want to see who is the best.”

As for the Duke, well he surely deserves greater recognition not only for his own fistic achievements but for his tireless charity work.

Now 52, he has been working with mental health organisation Mind for almost ten years, taking groups of people recovering from breakdowns or mental health problems for sessions in his Croydon gym.

That is the fate of the legendary training HQ of Sir Henry Cooper, among a host of other luminaries, housed on the first floor of the 117-year-old Thomas A-Becket pub in London’s Old Kent Road.

Cooper trained there for six days a week for 14 years from 1956 and there is a blue plaque outside the building commemorating his link with it.

The boxing facility has been defunct for some years and the pub’s licence was revoked by Southwark Council in March. Now it will be sold off by auctioneers Savills on 22 June.

There has been much talk about Dubai becoming boxing’s Las Vegas of the Middle East but so no-one has rung the first bell. Maybe things are about to change as it is reported in the US that Top Rank’s veteran boss Bob Arum is looking to stage a major show there in November. Apparently he wants to have three world title fights on the same bill.

Arum plans to have the winner of Timothy Bradley-Jessie Vargas, who meet for the vacant WBO welterweight title on 27 June, matched with unbeaten mandatory American challenger Sadam Ali, who is of Yemeni descent.

He also wants to line up super-middleweight Gilbert Ramirez for the WBO super middleweight title, which Arthur Abraham defends next month against Robert Stieglitz.

Added to this he plots a unification featherweight title fight between Vasyl Lomachenko and Nicholas Walters- provided Walters wins against Miguel Marriaga this weekend.

The ever-ambitious octogenarian hopes to nurture the boxing market in Dubai in the same way as Macau – where Top Rank has been staging shows for the last few years.  Busy Bob says:” I always look to explore new regions and feel we can do something similar in Dubai to what we have achieved in Macau. I am confident that we will be able to host shows every three months and that the biggest names in boxing will feature on the cards.”