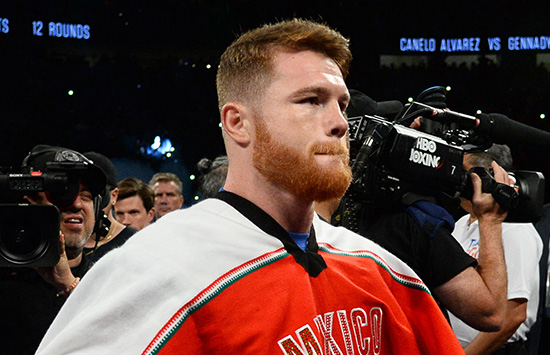 THE POSITIVE DOPE test on Saul “Canelo” Alvarez, one of the world’s greatest modern fighters, is a sure indication that boxing is fast joining the Premier League of drugs-infested sports alongside athletics, cycling and weightlifting.

The mighty Mexican middleweight has been found with traces of clenbuterol in his system, the latest in an in increasingly long line of boxers – now numbering over 70 – who have failed tests in recent years. Though it looks as if he is among those who  might be getting away with it.

For despite the shock positive test, his return mega-fight with Kazakhstan’s Gennady Golovkin, scheduled for Las Vegas on May 5, is expected to go ahead as it was blamed on “meat contamination” that is said to have has impacted dozens of athletes in Mexico over the years. Apparently this is acceptable to the boxing authorities. Oh yeah?

After Alvarez tested positive for banned substance clenbuterol, the reaction from the Nevada Athletic Commission and both the World Boxing Council (WBC)  and World Boxing Association (WBA) sanctioning bodies showed support for him.

Citing the Mexican superstar’s previously clean testing history and the “problematic” precedent of tainted meat in his native country, the belief is that, as long as Alvarez passes every future test before the Golovkin fight his pay-per-view rematch in  will  proceed.

And Daniel Eichner, the director of the laboratory  that conducted the tests on Alvarez’s sample, said in a statement that the levels of clenbuterol “are all within the range of what is expected from meat contamination”.

Britain’s World Boxing Organisation (WBO) champion Billy Joe Saunders, who has been hoping to secure a fight against the winner of Canelo v Golovkin, reacted to the news by posting an explosive tweet labelling him a “cheating red headed w****r”.

As I wrote here last week Saunders is not one to pull his punches – nor his words. He is also entitled to ponder, as I do, why Canelo, after testing positive for the same illegal substance as Tyson Fury, and supposedly for the same reason, is allowed to escape sanction while Billy Joe’s traveller pal has lost two years of his career, hundreds of thousands of pounds and his world heavyweight title because of it.

Clenbuterol is generally seen as a muscle-building substance but some medicos  believe it can also be used to mask other drugs.

While the majority of boxing’s world bodies  appear content to give  27-year-old Alvarez the benefit of the doubt Golovkin, understandably, is not so quick to forgive.

Cynics might say that governing bodies and the Nevada Commission appearing to turn a blind eye may have much to do with the vast amount of money involved.

But Golovkin a unified middleweight champion and long an advocate for cleaning up boxing with more stringent drug testing, used the words “shameful” and “stupid” to describe Alvarez’s failed test He also supported his promoter Tom Loeffler’s request that Alvarez should provide full disclosure of the time and pace the contaminated beef was purchased and consumed.

“When you get to this level, people should be watching the skills you muster from yourself, not wonder which laboratory you have,” he said.

Golovkin, 35, already felt the sting of what he thought was special treatment given to Alvarez, the biggest PPV draw in the United States, during their first meeting last September. The two fought a draw in a fight marred by controversial scoring. Most, like myself, felt Triple G had won.

There were also claims by the Golovkin camp that  the Nevada Commission allowed Alvarez to use an illegal hand-wrapping technique.

Intriguingly Alvarez’s trainer and manager – the  father-and-son duo of Jose “Chepo” and Eddy Reynoso – are butchers who own meat markets.

THE CANELO CONTROVERSY highlights’ the deeply disturbing trend of drugs-taking in boxing whivh is escalating towards epidemic proportions. As stated above, more than  70 boxers have proved positive since formal dope testing was introduced and a look at the current number back in the ring after serving suspensions or other sanctions is alarming.

Less than a fortnight ago American Deontay Wilder retained his WBC world heavyweight title against Cuban opponent Luis Ortiz who had twice failed  drugs tests. Bermane Stiverne, a previous Wilder opponent, was anothert who had fallen foul of drugs testing.

In Britain, two bouts, including one on the bill headlined by Anthony Joshua in his world heavyweight title defence against New Zealander Joseph Parker in Cardiff on Saturday week both feature fighters with a drugs history.

And a week later on the Joshua-Parker card in Cardiff another British heavyweight, the 2008 Olympic bronze medallist David Price, faces Russia’s Alexander Povetkin, Olympic champion in Athens four years earlier who has twice failed tests but Russia being Russia, escaped with barely a slapped wrist, simply missing engagements with Wilder and Stiverne while enquiries continued.

Moreover Canelo Alvarez is not the only fistic luminary to have been caught in boxing’s drugs net.

And Frenchman Tony Yoka, who succeeded Joshua as Olympic super heavyweight champion at Rio 2016, controversially outpointing Briton Joe Joyce in the final, and now a 3-0 pro, has just been handed a  suspended one-year ban by the French Boxing Federation for missing four doping tests.

So boxing may be roping in the dopes, but what is really worrying is that while in drugs-infested sports such as athletics and cycling the individual concerned  eventually may suffer harm, in boxing the danger is that an opponent could be seriously damaged – perhaps even fatally – in cases where prohibited substances give a fighter greater power.

Which is why doping is the fight game is getting to be a habit in boxing that as to be stopped.