Ali oops! M&M should remember the bad Joke in Japan 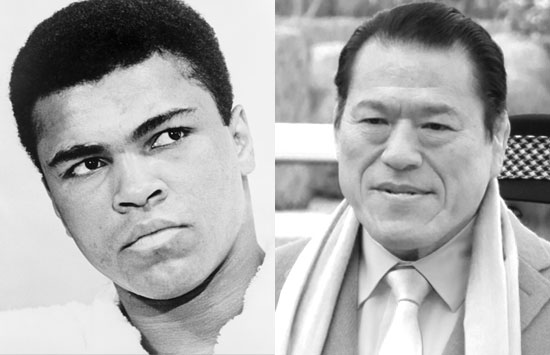 If the forthcoming hybrid encounter between Floyd Mayweather Jnr and UFC superstar Conor McGregor turns out to be more farce than fight, as most anticipate, then the consolation for the fans – and combatants – will be that exactly 41 years ago this week there was a precedent involving an even more celebrated fistic figure than the Money Man.

On June 26 1976, Muhammad Ali endured the most embarrassing night of his boxing career by taking part in an event that you will not find in his 61 bout record.

For it is one even The Greatest would have preferred to forget.

He accepted an invitation – and the then not inconsiderable sum of $6million to travel to Tokyo to take the most famous figure in the Land of The rising Son – wrestler Antonio Inoki – for what was labeled ‘the martial arts championship of the world’.

Like the 35-year-old world heavyweight champion, Inoki, 33, was a brilliant self-publicist, hero-worshipped in his own country. He even had has his own brand of products from vitamin water to condoms.

The idea of Ali fighting Inoki came about in April 1975, when Ali was introduced to Ichiro Yada, president of the Japanese Amateur Wrestling Association, at a reception in the US.

Supposedly, Ali bragged to Yada: “Isn’t there any Oriental fighters who will challenge me? I’ll give him one million dollars if he wins.”

The remark became headline news in Japan. Inoki accepted the challenge and eventually the fight was made. The venue was the Budokan in Tokyo.

Just a month earlier Ali had knocked out a hapless Richard Dunn in Munich. This was thought to be even more of a mismatch for the legend who shook up the world with The Rumble in the Jungle and Thrilla in Manila. But it was to be The Joke in Japan.

He did his best to whip up interest outside of Japan, calling Inoki The Pelican because of his lantern jaw and promised to ko him with a secret punch he claimed to have been perfecting. ”I’m ready,” he said. ”I can’t let boxing down. I can’t lose to that fat-bellied wrestler.”

Actually, what was kept secret was that, as in the pro wrestling game, the contest was to have been a fix. The agreed scenario was for a choreographed charade with Inoki declared the winner so as not to lose face in his homeland.

But when Ali got to Japan he could not bring himself to be party to such a ruse and refused to go along with it.

So he told the Japanese promoters they must fight for real.

That was when Inoki, realising he stood little chance of winning, elected to keep himself away from Ali’s cutting punches by spending most of the ‘contest’ lying on the canvas kicking out at Ali’s legs.

It was a total farce, more slapstick that slugfest.

Initially Ali began walking around the ring, out of reach of Inoki’s kicks, taunting him by shouting “Coward Inoki! Inoki no fight!”.

In the fourth round, Inoki, still on his back, trapped Ali in a corner and started hacking wildly at his thighs. Ali leapt up on to the ropes and tucked his legs underneath him.

In round six, Ali tried to grab Inoki’s left ankle as he kicked him, but Inoki wrapped his right leg around Ali’s right calf and flipped him over on the canvas. He then rolled over on top of Ali’s chest. While in this hold, Inoki elbowed Ali in the face, costing him three points.

Ali did not throw his first punch until the seventh round. In the eighth, trainer Angelo Dundee demanded that Inoki tape the tips of his shoelaces, claiming that one of the eyelets came loose and was cutting Ali’s legs. A wound had already opened up on his thigh.

In the tenth, Ali threw his second punch, and two more in the thirteenth. He threw only six punches in total during the fight.

The bout went the scheduled 15 round distance and was scored a draw. Inoki had been three points up but was docked all three for fouls. The result meant no one had to lose face; Inoki could claim he would have won had it not been for the penalties, whereas Ali could defend the result by saying his opponent had cheated. In fact, they stank the joint out.

Ali apologised and blamed Inoki for the lack of action. “I wouldn’t have done this fight, if I’d known he was going to do that.”

Ali’s promoter Bob Arum called the match the lowest point of Ali’s career. “It was a nightmare to end all nightmares.” Ferdie Pacheco – Ali’s doctor – agreed.

“Fighting Inoki was an incredibly stupid act,” he said. “To subject a great legendary fighter to a carnival atmosphere like that was wrong, he put his entire career in jeopardy for some dollars that he could have made just as easily without risking his reputation and his health.”

After the fight, Pacheco implored Ali to seek medical attention instead of following through with his planned tour through Asia where he was to hold a boxing exhibition in Korea then dedicate a shopping mall in Manila, Philippines.

As was his wont, Ali refused the advice, went along with the scheduled plans and by the time he returned to the US, doctors hospitalised him as his leg muscles remained badly damaged. Blood clots developed and damage to Ali’s legs was so extensive, there was even talk of a possible amputation.

Professional wrestler Bret Hart, then a sidekick of Inoki’s, claimed in his autobiography that “the black Muslims who were backing Ali made it clear that if Inoki laid a finger on their champ, they would kill him. That’s why Inoki lay on his back for fifteen rounds, kicking Ali in the shins so as not to use his hands”.

Actually, Ali and Inoki became good friends following the fight. Inoki started using Ali’s theme music, “The Greatest” (taken from the film), as his own signature tune, and borrowed the catchphrase “bom-ba-ye” from The Rumble in the Jungle.

Of course, unlike Ali and Inoki, McGregor and Mayweather will face each other under Queensberry Rules.

But what happened in Tokyo 41 years ago is a sobering reminder that pick-and- mix-matches from different disciplines can not only damage the health – but reputations too.