ALL ROADS LEAD TO LEICESTER 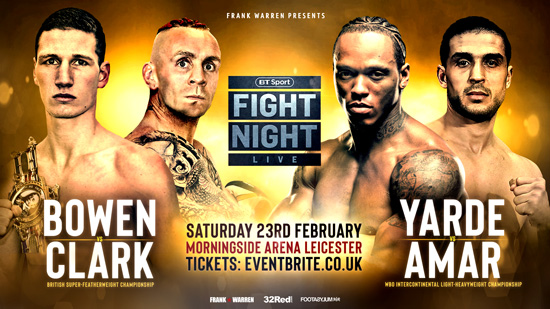 NEXT MONTH WE set the ball rolling for our 2019 roadshow when we land in Leicester at the Morningside Arena for a tasty little card headlined by a match-up that has got fight written all over it.

Sam ‘Bullet’ Bowen is one of our lead characters on February 23 and he is an impressive individual who I strongly suspect could turn out to be a very special super featherweight.

He is another quality operator who has forged his way in the pro ranks without the benefit of an Olympic background. Sam does possess a strong amateur pedigree, but did not have the advantages or instant recognition that the Olympians enjoy.

I’ve never been one to particularly focus my talent spotting on the Olympic field because it doesn’t offer any guarantees in the professional game and it is not something I would use as strict criteria when assessing prospects.

The proof is in the pudding when I look at people we have taken to world titles, with the likes of Naseem Hamed, Ricky Hatton, Joe Calzaghe, Liam Smith and now Josh Warrington not having had Olympic experience.

What they all had – or have – is talent, heart and a burning desire to succeed and reach the top of their profession.

I see the same traits in Sam and I am looking forward to taking him in the same direction. He is somebody the fight public can relate to and admire, a family man who fits in training alongside his day job.

It is not easy to work the two in tandem but it shouldn’t necessarily be considered a hindrance. Take Josh Warrington, for example, he continued earning a crust outside of boxing until after he became European champion.

It makes fighters appreciate what they’ve got – and use the time wisely – if they do reach the fortunate position of being a full-time athlete.

I believe Sam’s time will come soon enough because he will be in big fights in a thriving division. He has got a tough one on his hands in Leicester because, as we well know, Ronnie Clark is one tough customer.

Clark is a wily campaigner who, with a level playing field, will give any top super featherweight a very awkward night. I always say that fighters like Clark don’t just come to make the numbers up, they come to win and that is exactly what the Scot did when he put the only dent in the unbeaten record of Zelfa Barrett early last year.

He will be equally motivated this time around with the British title at stake and it will provide a real test of Sam’s credentials. I think it will be a cracker of a fight and a great way to kick-off our new year on BT Sport.

Another one who will have his work cut out on the night is our light heavyweight contender, Anthony Yarde. It is well documented how highly I rate Anthony and we have spent time developing him due to his relative lack of experience from the amateur code.

He has passed each test with flying colours and built himself a big reputation with his blistering performances. Now the learning curve is going to get steeper when he steps into the ring with former European champion Mehdi Amar.

Amar, who has been stopped only once back in 2012, challenged for the WBC Interim world light heavyweight title against the formidable Ukrainian Oleksandr Gvozdyk – recent conqueror of Adonis Stevenson with a perfect 16-0 record – in March of 2018 at Madison Square Garden.

Amar was defeated over the 12 round distance but showed what he is all about in operating at the highest level in an ultra-competitive weight division.

The 36-year-old is a vastly experienced campaigner with 267 rounds under his belt across his 43 professional fights. Anthony, by contrast, has clocked up just 46 rounds in his 17 fights so far.

There is always plenty of comment regarding Anthony’s career path and whether he should be taking on domestic fights or not, but at the moment we are working to a grander plan and looking towards the winner of the world title showdown between Sergey Kovalev and Eleider Alvarez.

That is the direction we are looking to go with Anthony.

As well as Sam Bowen, we’ve got some strong local interest on the Leicester bill, with a vacant Midlands Area title on the line between the unbeaten pair of CJ Challenger and Kyle Haywood, that should be some scrap.

Lyon Woodstock will get himself back into the groove after his setback in a thrilling fight against Archie Sharp last time out. I always say losing in a proper fight is not the end of the line and I am certain that Lyon will be back in contention very soon and in more fights that matter.

We also have Nathan Gorman – one of the two best young heavyweights in world boxing – launching his campaign for the year and looking to make a statement. Nathan was probably a bit frustrated over not being able to put Razvan Cojanu away inside the distance in December, but doing the full 12 will have done him the world of good and is a big box ticked in his development.

Another top level prospect who will further his experience on the night is Willy Hutchinson, a decorated amateur world champion who looks like he will go a long way in the professional ranks under trainer Dominic Ingle.

Ryan Hatton, from down the road in Birmingham, will continue with his impressive progression, while we are also bringing up our hugely talented south coast contingent of Ryan Garner and Mark Chamberlain.

Ryan, who I think is an excellent talent, will be stepped up and kept busy this year. If he maintains the discipline and application required then he has a massive future and will be a big star in the sport. Mark, who made his debut in December, has great promise and I am looking forward to seeing him develop.

Also having his second fight on the bill is Tommy Fury, who got to make his debut on our massive pre-Christmas Manchester show. I was impressed with what I saw and he is another one who is well worth keeping tabs on as he tops up his experience.