THE BIG INTERVIEW – JOSH WARRINGTON
Round 4 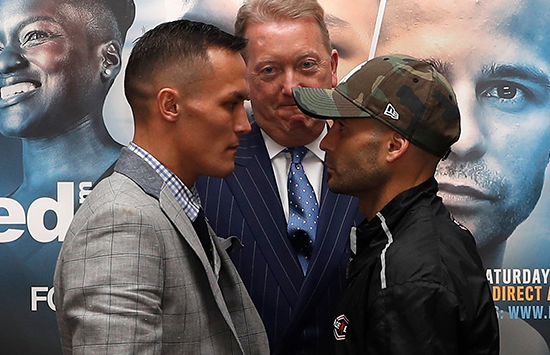 If everything had played out according to the original script, Josh Warrington would have already dipped his toes in the world title waters.

The plan was, under his previous paymasters – after building considerable momentum – for the Leeds Warrior to get it on with then stablemate Lee Selby in front of his adoring public.

It appeared all roads were leading to Selby and other routes were off-limits, which kind of made the pair hostage to one another and without a feasible Plan B if a stumbling block was encountered.

That is pretty much how it has played out. Selby-Warrington didn’t happen, for whatever reason, and both fighters have remained largely inactive – Warrington completely so since July of last year.

It resulted in the 26-year-old determining that a change of camps was in his best interests and he is now situated at the forefront of the ‘New Era for Boxing’ that is off and running across BoxNation and BT Sport.

Where once it was Selby or bust, Warrington’s horizons have now widened because his eyes are now firmly on the prizes, rather than the people in possession of them.

It was put to Warrington – who makes his return to the ring against former world champion Kiko Martinez at the Leeds Arena on Saturday – that the featherweight title picture is currently a little muddied with uncertainty surrounding the next moves of the champions.

This matters little to the former British, Commonwealth and European champion, who now views every avenue as a viable option.

“You say it is not so clear, but I see it as more clear than ever,” said the 24-0 man. “Over the last couple of years it seemed the only route for me was fighting Lee Selby for the IBF title.

“It seemed like it was the only way, but more than ever now it is more open for me. Selby has got his mandatory, but I don’t think it has all been finalised and dated, so that is not done and dusted.

“He knows it is a big payday fighting against me so you can’t rule that out completely in future. Then there is (Carl) Frampton, who hasn’t got a world title now and (Leo) Santa Cruz, who looks like he is fighting (Abner) Mares, so that one might be tied up.

“Gary Russell jnr (WBC champion) has been supposed to fight for some time now, but hasn’t, so you wonder what is going to happen with him now. Will he hang about or move up and vacate?

“I’m ranked No.2 and they’ve ordered for me and Joseph Diaz jnr to fight, who is ranked No.1. If Russell moves on, that title might free up and we could go for that one.

“There is more than one option now and it feels like we can go down other routes and are not just stuck with the IBF.

“Let’s get this fight done and out of the way and see where we go from there.”

Warrington doesn’t rule out biding his time a bit and getting a couple more fights under his belt before taking the plunge, but he knows much depends on how impressively he can counter the obvious threats presented by Martinez.

“We’ll see happens because it is about getting this one done. If I come through in a good fashion and a world title comes up then we will really consider it because that’s what I want.

“The more likely option is getting a final eliminator or something like that. It is boxing and anything can happen in this game. You can plan a route and it doesn’t always work out like that.”

The plan to realise the dream of fighting at his beloved Elland Road, he accepts, will most likely have to be placed on hold because there is a very small window for stadium fights due to the refurbishment of pitch during the close season.

As far as Warrington is concerned, that can wait, because defending a title on the centre circle carries just as much appeal as winning one there.

“This is it, I don’t think it will happen this year now because it has got to be a certain time of year and they won’t want people trampling all over the pitch when they’ve got a season to get ready for.

“I’d like to fight for a world title at the Leeds Arena then we can always go back to the stadium and defend it there.

“All in good time though.”