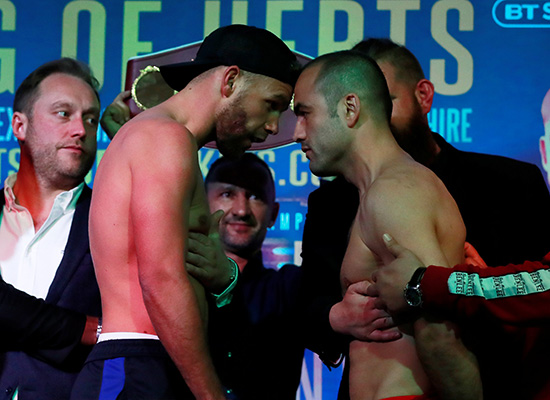 What Billy Joe Saunders is attempting to achieve on Saturday night in Stevenage should not be underestimated.

Should he overcome the Albanian Shefat Isufi, Bill will become a two-weight world champion and will take his place in a roll of honour that includes the likes of Nigel Benn, Ricky Hatton and David Haye.

It is an elite band of men and Bill will not be out of place amongst them.

The fact that his opponent is not a household name and that they are fighting for the vacant WBO super middleweight championship of the world has perhaps resulted in the magnitude of what Bill is attempting to do being overlooked in some quarters.

People shouldn’t forget that Bill is already an undefeated world champion at middleweight and bidding to repeat the feat at the weight above is a natural course of events for someone as talented as him.

Shefat Isufi is, it is true, not a name that rolls off the lips of boxing fans, but he has earned his ticket by becoming the No.1 ranked contender with the governing body and he is an undefeated fighter at the weight.

Bill is not going to turn up and blow him away because it is highly likely Isufi will be the significantly bigger man on the night when they take to the ring in the centre of the pitch at the home of Stevenage FC.

He has come down from cruiserweight so he is going to be a pretty big lump to shift when he is fully replenished after making weight.

This isn’t just about Bill making a bit of history by becoming our most recent two-weight world champion, it is about getting him right in the mix for the biggest of fights.

Canelo now very much rules the roost at middleweight and, I know for a fact, his handlers will not put their golden goose in with Bill. He is too much a risk and they know a slick southpaw with a solid chin is all wrong for the Mexican superstar.

So there are very few avenues available at middleweight, which is why we sought out an opportunity at 168lbs.

Victory will open up all sorts of doors and Bill would be holding a valuable bargaining chip. The world titles at super middleweight are yet to be unified and those are the fights we would be looking for.

Of course, should a major opening come up at middleweight Bill will always have the option of dropping back down.

Let’s not get ahead of ourselves though because he has got a job to do at the Lamex Stadium in front of the BT Sport cameras. The response from the people of Hertfordshire has been fantastic and they are in for a great night of world championship boxing under the stars on Saturday night.

Joe Joyce is another looking to put a big marker down when he makes his way onto the pitch at Stevenage. The big heavyweight is on the cusp of major title opportunities after just eight fights as a pro and is already in pole position for a shot at the European and a version of the WBA titles.

The Olympic silver medallist will have his first fight on our watch on Saturday and he will be provided with a significant test by the giant Alexander Ustinov, who has been a highly-ranked heavy for many years now.

I fully expect Joe to come through and then we’ve got our massive night titled ‘Heavy Duty’ at the 02 Arena on July 13 where he will be in for another tall order on a card featuring the huge showdown between Daniel Dubois and Nathan Gorman.

Those three represent the future of heavyweight boxing in this country.

Another fight I am particularly looking forward to this weekend is the British super bantamweight title encounter between Brad Foster and Ashley Lane. Brad, a former world champion kickboxer as a junior, won his Lonsdale belt in just his 11th fight from the away corner last year with no amateur experience behind him at all.

He is clearly just a natural at combat sports and he has signed up with us now so I am excited to plot the next stages of the 21-year-old’s career.

On the subject of new signings, the nine-time national amateur champion Dennis McCann makes his debut at Stevenage and I am very much looking forward to seeing his story unfold, while Commonwealth Games gold medallist Lisa Whiteside makes her professional debut on the card and I wish them both every success in the pro ranks.