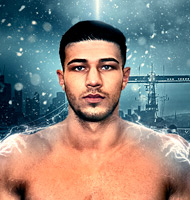 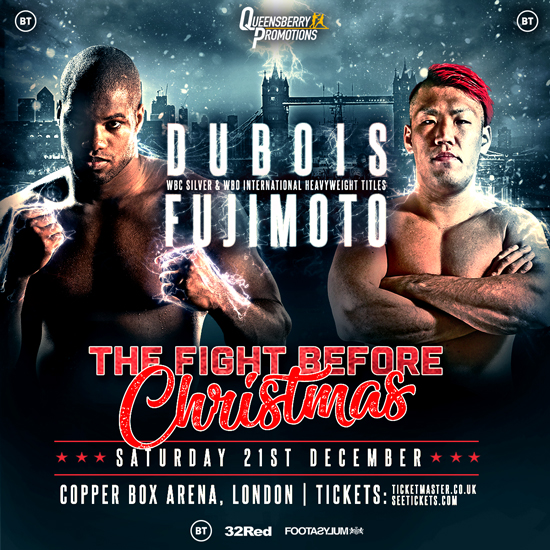 DANIEL ‘DYNAMITE’ DUBOIS (13-0, 12KOs) takes on a new front on his prolific title hunt when he challenges for the WBC Silver Championship at the Copper Box Arena on December 21 against Japan’s Kyotaro Fujimoto (21-1, 13KOs). Dubois’ recently won WBO International Title will also be on the line. ‘The Fight Before Christmas’ will be televised by BT.

Last month Dubois was added to the top 15 of the WBC rankings and he now gets to mark the occasion with a tilt at the governing body’s Silver title belt that successfully winning would further strengthen his position. The previous holder of the belt was Dillian Whyte, who made three successful defences of the title between April 2016 and December 2018. Dubois also holds a number 9 ranking with the WBO and number 15 ranking with the IBF.

December 21 will represent Dubois’ fifth fight of a productive year that has seen him record four KOs and not being taken beyond the fifth round at an assortment of major venues across the capital. He now returns to the Copper Box for the first time since December 2017, having recently showcased his explosive talents twice at the Royal Albert Hall, Wembley Arena and the o2 Arena.

Fujimoto holds a strong record of 21-1 with 13 wins coming via KO. A resident of Tokyo, his only reverse came in his sixth fight back in 2012 and he is the current holder of the WBO Asia Pacific title that he won by stopping Herman Ene Purcell in the ninth round in May 2017.

He has subsequently made three defences of his belt, winning all by stoppage, and he is ranked at 12 by the WBA. Fujimoto will be a first Asian opponent for Dubois, having previously sampled the experience of opponents from Africa, Eastern Europe, as well as North and South America.

“I wanted to defend my British Title but no one would step up to fight me. I want to be fighting world champions within the next 12 months and when the opportunity to fight for the WBC Silver Title was made available, a belt that Dillian Whyte held until his last fight, I jumped at it. I’ll also be defending my WBO International title I won in my last fight” said Dubois on his latest assignment.

“Fujimoto has a good rating and is a great stepping stone on my path to the top.

“He will have his own ambitions and I know he was rumoured before to be considered for a fight with Anthony Joshua, but I will be knocking that ambition out of him on December 21stwhen I knock him out.”

Promoter Frank Warren added: “This is all about continually increasing Daniel’s experience levels against tough opposition. He has made huge and rapid strides in a short space of time and Fujimoto will present the ideal and a legitimate test at this point in time.

“Daniel cannot afford to underestimate Fujimoto and I am sure he won’t. Fujimoto is ranked highly by the WBA who, incidentally, are the only governing body not to include Daniel in their top 15, so hopefully this is another box he will be able to tick with an impressive performance on December 21. A win here will see Daniel ranked by all the major organisations.

“It has been a big year for Daniel and the combined record of his last three opponents stood at 49-1 before coming up against our man and Daniel completed his work in under 10 full rounds of action.

“We shouldn’t overlook what Daniel is fighting for here because the WBC Silver and WBO International belts have been the headline prize on pay-per-view shows staged in the UK in recent times and is the established pathway towards a shot at the world title, which is the direction Daniel is heading in as we move towards 2020.”

There will be a press conference on Monday to announce the full card. Details to follow.

Tickets on sale now via Seetickets and Wednesday from Ticketmaster.