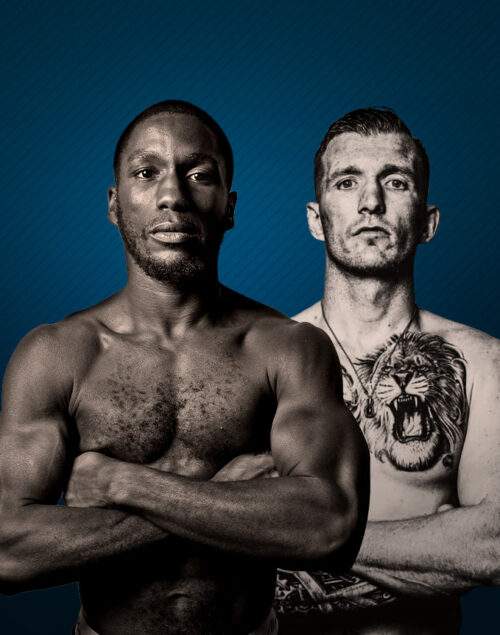 On a night where Frank Warren and Queensberry will again provide a showcase for their multitude of elite prospects, Southampton featherweight Ryan ‘The Piranha’ Garner will fight for a first title, the vacant WBC International Silver championship, plus two unbeaten talents collide at middleweight.

Nottingham’s Essuman (16-0, 7 KOs), known as ‘Ekow the Engine’, impressively seized the Lonsdale belt from former champion Chris Jenkins in July of last year and made a spectacular defence in October against the previously unbeaten Danny Ball, who was brutally knocked out in the sixth round.

Bradford’s Tetley (21-2, 9 KOs) won the WBO European title in May 2015 against Mason Cartwright and remained unbeaten for a further four fights before losing out in a thriller against Liam Taylor in August 2020. A challenge for the vacant English title against Samuel Antwi did not go his way in February of last year, but the 28-year-old got back into winning ways in November over six rounds.

Garner, 24, has long been regarded as one of the brightest prospects on the UK scene and his 11-0 record features six impressive stoppages. He was stepped up in November against the 9-1 Angolan Pedro Manuel Gomes and passed his test with flying colours over eight rounds.

Now he wants to be in big fights and replicate his amateur experience that saw him reach minors finals at the age of 11 before winning two schoolboy championships. He also reached the quarterfinals of the world junior championships, as well as bagging European gold at junior level.

In a battle of the middleweight unbeatens, James Heneghan (6-0) from Merseyside jumps in with Finchley’s Jonathan Kumuteo (3-0, 1 KO).

Former amateur superstar Charles Frankham (4-0, 2 KOs) from Crowthorne is back in action at super featherweight, along with ex-Team GB product Callum Thompson (3-0, 1 KO), the Joe Gallagher-trained lightweight from Liverpool.

Two recent Queensberry signings complete the card, with featherweight Raven Chapman (2-0, 1 KO) having her third fight in the professional ranks and Blu Bowers from Fareham making his debut at super bantamweight.

“It is great news that we are able to deliver another ‘Prospects Show’ that gives our young talent a chance to shine on a major platform and showcase their abilities to a huge audience,” said promoter Frank Warren.

“Of course, every show needs a headline act and we’ve got a multi-title battle between British welterweight champion Ekow Essuman and Darren Tetley.

“I’ve been so impressed with Ekow since he teamed up with Queensberry and the honest truth is that I would confidently put him in with any welterweight in Britain. Darren is a real warrior so we should have a cracker on our hands with this one.

“Ryan Garner is a young fighter I have admired from day one and had great belief in. He has had his ups and downs but is now completely focused on his craft and he is getting his reward with a first title chance.

“We should really see more of young pros trying their luck against each other so I am happy that James Heneghan and Jonathan Kumuteo are backing themselves in what should be a smashing fight at middleweight.

“Many of our other top prospects will be on parade, but I would like to welcome our new signings Raven Chapman and Blu Bowers to the Queensberry ranks and I look forward to seeing them in action on April 29.”

Tickets for the show at York Hall on Friday, April 29 are on sale now, available directly from the fighters or via eventbrite.co.uk or call: 01992 505 550 (office hours).