Dennis McCann is back

Dennis McCann is back 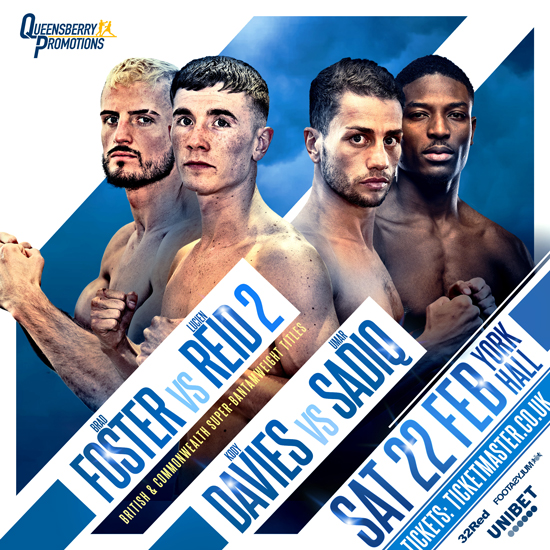 THE HIGHLY-ANTICIPATED rematch between unbeaten super bantamweights Brad Foster and Lucien Reid with the British and Commonwealth titles on the line will take place at York Hall on February 22.

Also on the bill is thrilling super bantamweight prospect Dennis ‘The Menace’ McCann for his sixth professional assignment, Southampton snapper Ryan ‘The Piranha’ Garner (8-0) aiming to make a timely return and make up for lost time at super featherweight, as well as featherweight starlet Louie Lynn (5-0) from Banstead looking to build on his impressive Queensberry Promotions debut in December.

News on further exciting additions to the bill will be confirmed shortly.

The majority draw declared between the champion Foster and Reid in mid-September proved to be a source of significant controversy, with many observers marking the challenger as the winner in his first 12 round assignment.

The 22-year-old Foster completed his third 12 round test of a productive 2019 and considered himself in need of some time out having suffered a cut above his left eye early in the second round.

The Lichfield man now makes a third defence of the British title he won by beating Josh Wale from the away corner in Barnsley in March of last year. It represents a second defence of the Commonwealth crown he prized via a 12th round knockout from Ashley Lane at Stevenage in May.

“It will be another good scrap and one where I need to put things right,” insisted the champion. “I need to win this one and close this book. Simple as that.

“A draw is not the way I want to keep my titles and it was disappointing to keep them with one. This time I’ve got to win the fight convincingly.

“I can take a lot from it but he can as well because he knows what I’m like now and that is what makes it a tasty fight.

“I’ve had a nice little break to get over a few injuries including a broken knuckle after the last one. I am back at it now and on February 22 I will be the winner.”

Reid, 26, insists he is on a mission to right a wrong and will carry a sense of injustice into the ring with him.

“A million per cent and I can’t wait to prove that I did win the fight and I will do it in a fine fashion,” said the pupil of the Queensberry iBox Gym. “I am not going in there to do anything less or the same as I did last time. This time you will see a totally different me as well and I will change it up.

“Every single person knows that even if I won it by one round I still won the fight. When I get in there with Brad I am going to old man him again, move him about and prove that I am the rightful champion.

“I am also going in there thinking he will come out unbelievable so I am looking forward to seeing that and how I adjust to it because I know I can.”

Tickets from £40 are available via TicketMaster