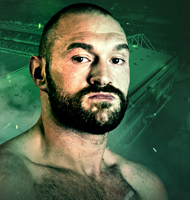 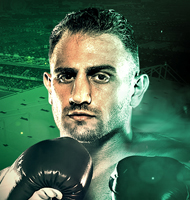 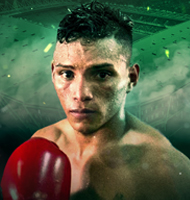 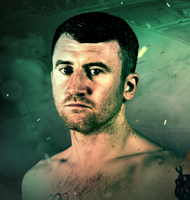 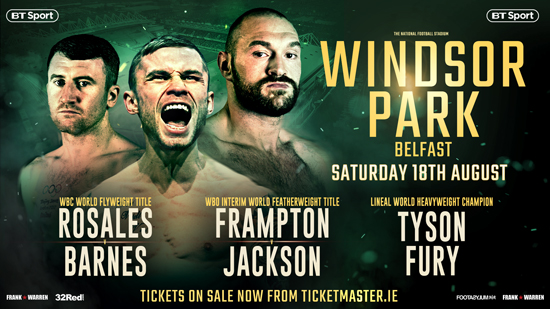 Carl Frampton will realise a career-long dream when he defends his WBO Interim World Featherweight Title against Luke Jackson on the pitch at Windsor Park, Belfast, on August 18, on a card that also features Paddy Barnes challenging for the WBC World Flyweight title and the second fight of Tyson Fury on the comeback trail.

The 31-year-old two-weight world champion Frampton, who rolled back the years with a memorising performance to win the WBO belt against Nonito Donaire last time out at the SSE Arena in April, takes on the unbeaten Australian from Hobart in a bid to keep his ambitions to once again rule the featherweight roost on track.

The 33-year-old Jackson, 16-0, is the holder of the WBO Oriental Title, having previously held the WBA Oceania belt. He also captained the Australian boxing team at the 2012 London Olympics and won Commonwealth Games bronze in 2006.

Frampton acknowledges his challenger could be deemed something of an unknown quantity to fight fans in the Northern Hemisphere, but will in no way take victory on the night for granted.

“He is and I think a lot of people will expect to just to beat him up and blow him away,” commented Belfast’s favourite fighting son. “But he is ranked No.4 by the WBO, he is an Olympian with a good pedigree and is undefeated.

“That is what I intend to do and then move on and hopefully fight for a world title before the end of the year.

“I imagine some people will have been expecting a different opponent, but the fact I am not fighting a world champion is the fault of nobody. Josh Warrington beating Lee Selby sort of threw a spanner in the works for us because I think Selby would’ve come to Belfast.

“Oscar Valdez is out injured, Gary Russell has just fought and Leo Santa Cruz and Abner Mares also just fought. That’s it really; the top guys just aren’t available. It is good for me to get a defence in here.

“This is a dream for me and it is something I have talked about for a long time. You never know what happens in this game, it could be the one and only time I get to fight at Windsor Park.

“It is going to be a special occasion for myself and my family. For the people who are going to come and watch it there is going to be a top quality undercard as well and I think it will be a night to remember for Belfast.

Hall of Fame promoter, Frank Warren, added: “We are delivering on a promise I made to Carl to ensure his dream of fighting at Windsor Park becomes a reality.

“The world title challenge we envisaged we unfortunately could not bring to fruition at this time but Carl is up against a hungry, unbeaten challenger in Luke Jackson who, as I often say, will not be coming to just make up the numbers.

“World title shots will come again soon enough for Carl and we have the IBF champion Josh Warrington waiting in the wings for a huge fight not too far down the line. Carl will also remain in pole position to challenge the WBO full champion Oscar Valdez when he returns from injury, should he overcome Jackson.

“Carl, as ever, will always be the focal point of a fight night in Belfast, but we are also planning a huge card for the Belfast public to feast their eyes on and two major attractions we have already confirmed is Tyson Fury making his fourth appearance in the city in his second fight of his comeback, as well as Paddy Barnes attempting to achieve the remarkable feat of winning a world title in just his sixth professional fight.

“It is certain to be a special night and I am sure Windsor Park will be packed to the rafters creating an atmosphere we have never heard the like of before.”

Barnes challenges for the WBC World Flyweight title against the Nicaraguan Cristofer Rosales, 27-3, who claimed the belt in a huge upset win over the previously unbeaten Japanese Daigo Higa in April, with a ninth round stoppage in Yokahoma.

“It is going to be an amazing night where I get to fight for a world title in my home city, so I cannot wait until it happens,” said the 31-year-old two-time Olympic medallist.

“The fact it is for the WBC title means even more, the green belt is the best one in boxing so it makes it even more special.

“Rosales is good at what he does, but I feel I have the skill to outfight and outbox him. It will be a very, very hard fight though.

“People will talk about me fighting for a world title after just six fights, but I don’t view it as a gamble because of my history as an amateur.

“I don’t think winning a world title after six fights will ever be matched again here.”

Tickets on sale via Ticketmaster.ie

HOSPITALITY LOUNGE ACCREDITATION WILL BE SUPPLIED AS A UNIQUE WRISTBAND

THE HOSPITALITY LOUNGE WILL OPEN FROM APPROX. 3:30pm – 8pm