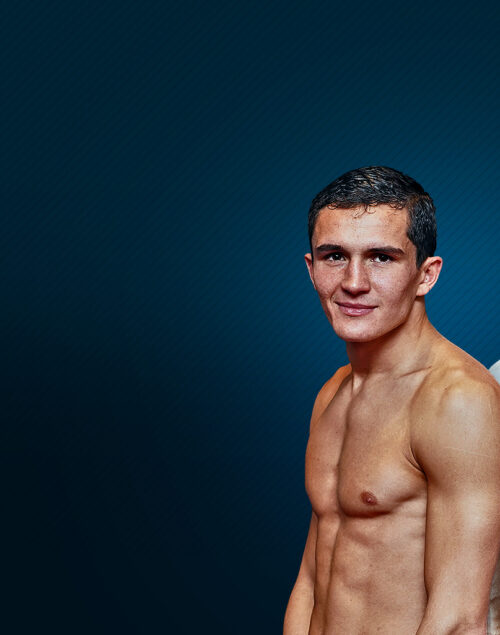 THE OPENING NIGHT of Queensberry’s series of shows with the spotlight placed on top prospects will take place at the Copper Box Arena on Friday September 10, live on BT Sport. The show will also be available live and free on the BT Sport Boxing YouTube channel.

To mark the occasion, two unbeaten young featherweights will top the bill with the WBC International Silver title at stake and thrills and spills guaranteed.

The champion, Louie Lynn (9-0, 7 KOs) from South London will defend against Bradford’s Amin Jahanzeb (8-0, 2 KOs) over 10 rounds in a fight that will bring about a fascinating clash of styles.

‘Loco’ Lynn, 25, is a relentless volume puncher who goes for the jugular, whereas Jahanzeb, also 25, likes to employ slick skills and clever footwork to unpick his opponent.

Peacock Gym man Lynn won his WBC strap last time out in a big step up against the 12-1 Spaniard Sebastian Perez in March, also at the Copper Box. Jahanzeb last fought in September and recorded a points victory over six rounds against Jamie Quinn at York Hall.

Also on the bill, which falls the night before Sunny Edwards makes a first defence of his IBF world flyweight title against Jayson Mama, former Olympic Youth gold medallist Karol Itauma in his fourth professional fight.

The Chatham light heavyweight has enjoyed a successful introduction to the pro ranks and has executed knockout finishes to his last two fights.

The card also features the super welterweight cousins Josh and Levi Frankham, who will be taking part in their fourth and third fight respectively, while super bantamweight Adan Mohamed from Buckhurst Hill will have his third fight over four rounds. Middleweight Jonathan Kumuteo from Muswell Hill will make his second appearance as a professional.

Two highly-anticipated professional debuts complete the card, with Rotherham’s double National champion and former England international Junaid Bostan taking his first step as a pro. The 19-year-old boxes out of the Steel City Gym in Sheffield, where he works alongside Sunny Edwards under the stewardship of leading trainer Grant Smith.

The Liverpool boxer, 22, who had 96 amateur bouts, is trained by Joe Gallagher in Bolton.

“I am delighted to be launching our new series of shows on September 10 ahead of world title action the following night,” said promoter Frank Warren. “It will give the fans a double helping of boxing to look forward to and, on the Friday, our young stars will have the show to themselves and a big chance to shine.

“I would like to again thank BT Sport for getting behind this project and supporting the sport at another level. This is an opportunity for people to identify talent at an early stage and get behind the ones who catch their eye.

“I am thrilled that we are kicking off with a cracking prospect v prospect battle between Louie Lynn and Amin Jahanzeb and I hope we get to see more of this type of match as we move forward. Viewers will have seen a bit of Louie previously, but this is his chance to headline the show and adapt to a different set of circumstances. For Amin it is a huge opportunity for him to show us what he’s got and stake his claim for a higher place in the pecking order.

“I am also looking forward to seeing the continued development of the other fighters on the bill and officially welcoming Junaid Bostan and Callum Thompson to the Queensberry fold.”

Tickets for LYNN vs JAHANZEB are available here