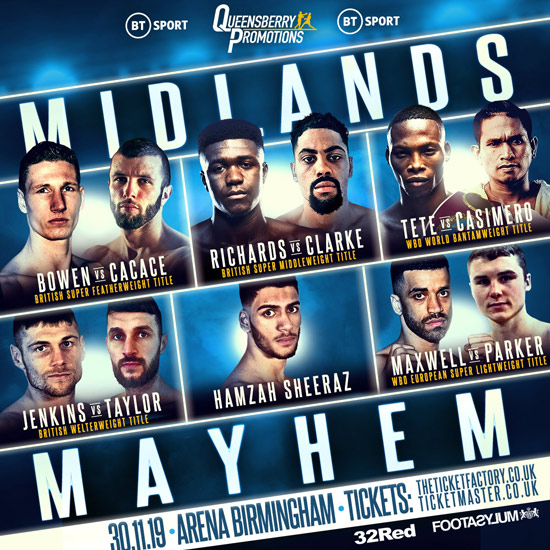 Frank Warren’s Queensberry Promotions are heading to the Midlands to stage a bumper night of boxing at Arena Birmingham Saturday November 30, live on BT Sport. Tickets will go on general sale on Friday 18th October at 12pm via Ticketmaster and Ticketfactory. The bill is stacked with 50-50 clashes featuring six title fights, including 4 domestic bouts and a world championship contest. With more fights to be added, the show will feature:

Sam Bowen (15-0, 11KOs) will be well supported when he defends his British Super-Featherweight crown against Belfast’s Anthony Cacace (17-1, 7KOs). Ibstock’s Bowen, 27, won his belt in April 2018 and made his only defence in March stopping Jordan McCorry in nine rounds. He says: “The plan is to win British outright, although if a world title chance came first I would jump at it.”

Cacace dropped a unanimous points verdict when he challenged Martin J Ward for the British and vacant Commonwealth title in July 2017, but bounced back with two wins. Cacace said: “There is a lot of momentum with Sam right now. I know what I am up against.” Lerrone Richards (12-0, 3KOs) will make the first defence of his Commonwealth Super-Middleweight title and the vacant British championship is on the line when he meets Lennox Clarke. New Malden’s Richards is hugely talented, but Halesowen’s Clarke (19-0-1, 7KOs) will have big support, just nine miles from his home. “It is a fight that will obviously motivate me and there is a lot on the line with it being for the British title. Winning would be another launch pad for my career,” said Richards. Clarke said: “I’m his first real test and I’m prepared to win any which way I have to.” Zolani Tete (28-3, 21KOs) makes the fourth defence of his WBO World Bantamweight title against John Riel Casimero after his promoter Frank Warren won the purse bids. It will be Tete’s first fight since October 2018 when he defeated Russia’s Mikhail Aloyan in the World Boxing Super Series. Unfortunately injury then ruled him out of the tournament.

“I have fully recovered from the shoulder injury and I will be testing it on Casimero’s chin. I am back,” warned the South African. Filipino Casimero (28-4,19KOs) stopped Charlie Edwards in a IBF Flyweight title defence here in 2016 and is brimming after capturing the Interim WBO crown. Swansea’s Chris Jenkins (22-3-2, 8 KOs) risks his British Welterweight championship against mandatory challenger Liam Taylor. Jenkins, 31, dethroned Johnny Garton in March winning on points, but clung on to his title and picked up the vacant Commonwealth crown with a technical decision over Paddy Gallagher in August.

He said: “I have spoken to boxers who have seen Liam in the gym and they rate him highly.” Middleton’s Taylor (21-1, 10KOs) booked his British title crack last November by avenging his only career defeat winning a split decision against Tyrone Nurse in an eliminator. Taylor says: “I have to be honest I didn’t think Chris would beat Johnny Garton who I thought would be too big. He has improved a lot.” Liverpool’s Sam Maxwell (12-0, 10 KOs) defends his WBO European Super-Lightweight championship against Derbyshire’s Connor Parker (12-0, 1KO). Maxwell became a household name in March with a title winning TKO of Sabri Sediri 14 seconds from the end of their ten rounder going viral. “I want to be entertaining and have a good win, but I don’t particularly want to go viral in pulling out a win from the brink of defeat again!” said Maxwell.

Parker, 24, warned: “I’m a few years younger than him and think that this is my time to shine on the big stage.”

Popular super welterweight Hamzah Sheeraz (9-0, 5KOs) will be involved in his first title fight when he challenges for the vacant WBO European super welterweight championship. Sheeraz’s opponent will be confirmed this week. Hall of fame boxing promoter Frank Warren added: ” I am absolutely thrilled to be heading back to Birmingham. It’s been a while since we’ve staged a show there and this is going to be an absolute cracker. There’s going to be so much quality on this show and I’m particularly excited about seeing our man Zolani Tete out again.” A super talented undercard features bantamweight starlet Dennis McCann (4-0, 3KOs). McCann’s Ibox Gym stablemate Eithan James (1-0) gets his second appearance of the year. After successful Queensberry Promotions debuts, both Shabaz Masoud (6-0, 1KO) and George Davey (1-0) both return on the show. Also featuring on the show will be popular Stoke middleweight Nathan Heaney (8-0, 2KOs), Birmingham welterweight Ryan Kelly (14-2, 7KOs) and Warwickshire middleweight River Wilson-Bent (5-0 2KOs). Tickets will go on a venue pre-sale at 12pm on Thursday 17th October followed by general sale on Friday 18th October at 12pm via TicketFactory and Ticketmaster.