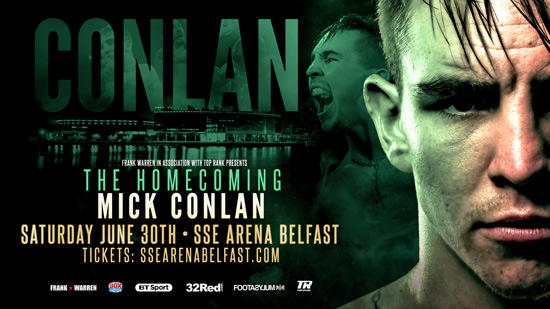 The undefeated former Olympian will fight on home soil for the first time as a professional at Belfast’s SSE Arena on Saturday, June 30th, live on BT Sport.

Conlan, 26, has raced to 6-0 with five spectacular early finishes since making his professional debut with Hall of Fame promoter Bob Arum and Top Rank on March 17, 2017.

Belfast native Conlan stopped heavy-handed Hungarian David Berna in two rounds at New York’s Hulu Theater at Madison Square Garden last time out and will be looking to push on again in June.

The rising Featherweight star, who is also scheduled to fight Ibon Larrinaga May 12th as part of the Jorge Linares-Vasyl Lomachenko card at Madison Square Garden, is aiming to continue his impressive form and put on a show-stopping performance for his hometown fans.

“What a huge honour it is for me to box back in my home city,” said Conlan. “I’ve been to an awful lot of huge boxing events around the world, and there are very few that can match the atmosphere the people of Belfast can generate.

“Belfast is a city that loves boxing, and I’m very grateful that I can bring a big show to these shores that I call home. I feel I need to pay back all the fans that have been traveling to the U.S., time and time again, to see me fight. This one is for them, and I hope to bring many more fights to Belfast again in the future.

“I would like to give a shout-out to my management team MTK Global and promoters Frank Warren and Bob Arum for making this possible. See you all June 30th!”

“I’m thrilled to be bringing Irish amateur hero Michael Conlan back to his hometown,” Warren said. “The Irish have been desperate to see him in action back home, and on June 30th, they will get the chance to watch one of the best Featherweight prospects in the world in the flesh.

“There is no doubt he has the potential to follow in the footsteps of the likes of Carl Frampton and Wayne McCullough – two of Ireland’s finest. He has made an explosive start to life in the professional code, and I’m predicting fireworks from him on his big homecoming.”

Ticket information for Conlan’s highly-anticipated homecoming will be announced soon.