Amir down but far from out in my book

The ‘I told you so’ brigade have been out in force this week making themselves heard, after Canelo Alvarez’s one punch knock-out of the brave Amir Khan. 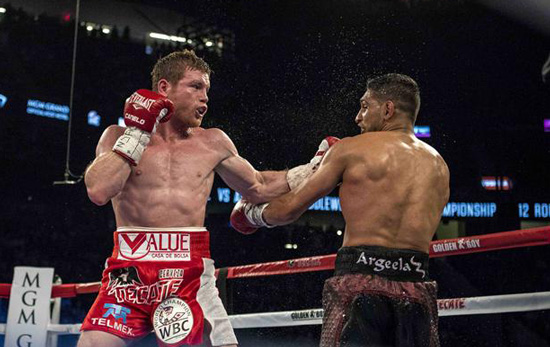 But Amir knew the score himself all along. If he were to leave himself open and get heavily clipped, it would be lights out and, unfortunately, that proved to be the case.

Amir was banking on his slick footwork keeping himself out of harm’s way, while his speedy hands bamboozled the considerably heavier man. It worked for a while – I had him 3-2 ahead when the lights went out – but the lurking menace of the Mexican was ominously evident throughout.

But fair play to Amir for attempting to defy the odds, for which he was handsomely and deservedly rewarded.

It is not all about money for the Bolton boy, he is one who has always wanted to push the boundaries right from the off in his career.

I promoted him at the start of his professional boxing journey and, even before he set off in the paid ranks, he wanted to wrap up his vested interests with a statement fight. So Mario Kindelan, the legendary Cuban southpaw who defeated him in the final of the 2004 Olympics, was persuaded to make the trip to Bolton for Amir’s amateur swansong.

Amir avenged his Athens defeat in May 2005 in front of a peak watching audience on ITV of some 6.3m viewers. He bounced back then and has done on a few occasions over the last 11 years.

You have to admire the now 29-year-old for wanting to measure himself up against the elite of the sport, that is what he is about and it is why he headlines in Vegas. He is happy to meet the best on their home – or adopted – patch.

So I am sure he could do without the sour grapes musings of Eddie Hearn, who accused Khan’s team of endangering his health after he came up short against Canelo. We all know, and understand, that Hearn wanted Amir to sign up for an all-Brit coming together with Kell Brook, but Khan operates at a different end of the market to Brook – and always has.

Hearn’s comments were out of order, ungracious and little short of crass. Khan showed guts to get in the ring with Canelo and he backed himself to pull off an upset. It didn’t work out for him this time, but his street cred on the Strip remains high and he will have gone up in the estimation of most in the game for giving it a shot.

I recall when the fight was made that Hearn was considering putting in a call to Gennady Golovkin in order to provide a similar assignment for Brook. That one went very quiet and a mandatory against the hopelessly inadequate Kevin Bizier was duly fulfilled in Sheffield.

Health warnings from the Hearns are, however, a little hollow when you are reminded of the old man sweating off excess pounds in the sauna with Lee Purdy before his fight with Devon Alexander the US…strictly against Board of Control regulations, for which Matchroom were duly fined and reprimanded.

We still await news of Brook’s breakthrough into the Khan-style big time. We made an offer for him to step up a few pounds and take on our WBO super welterweight world champ Liam Smith, but a response was not forthcoming.

This would be another big fight that the public would buy into, so why not get it made? Liam wants the big nights and so, we are told, does Brook. It is a fight that would be far more appealing to the punters than the names we are hearing are on Hearn’s latest chopping list.

Amir has been quoted as saying he reckons he has another three or four big fights left in the tank and wants to box again in the UK. So when he is back in full working order and ready to go again, Liam would be another tasty scrap for him too.

It is something for him to think about while he recuperates. Meantime Liam is looking to polish off Montenegro’s Pedrag Radosevic at the Echo Arena on Saturday  June 4 in the second defence of his title, live and exclusive on BoxNation.

It seems many putative contenders in the division are running scared of big-hitting Beefy. Including Austin Trout, the mandatory, who at first seemed keen on the bout but then apparently decided challenging IBF champion Jermall Charlo was a softer option.

But at least the man from Montenegro has stepped up to the plate. His only defeat in 31 congests was at middleweight to the redoubtable but now drugs-discredited German Felix Sturm.

Slavs love a good scrap so you can be sure Radosevic will give it a real go.