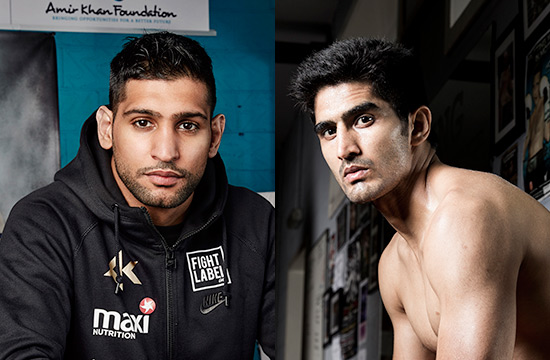 Bolton hero Khan is gearing up for his maiden middleweight contest against Mexican great Canelo Alvarez on Saturday 7th May. You can watch Khan v Canelo on BoxNation

Two-time former world champion Khan, 31 wins, 3 losses and 19 KO’s, faces the biggest challenge of his life when he steps up in weight to take on Canelo in a truly career defining fight.

Lightening quick Khan has faced insurmountable odds in the past when as a 17-year-old at the 2004 Athens Olympics he mesmerised the nation as he battled his way to a silver medal.

King Khan accepts he will face a “monster” when fighting Alvarez but is confident he can summon his underdog spirit and prove his class on the global stage. Once he has overcome WBC middleweight champion Alvarez, Khan says he’d love to take on Singh in his Indian homeland.

Speaking to Indian media from San Francisco ahead of his fight against Alvarez he said: “Vijinder is the talent that India has in professional boxing and I would want to fight him in India soon,”

He added: “I am a big fan of Mary Kom and Vijender Singh. They are where they are because they had the opportunities. It’s the same for most boxers and that’s why I want to create these academies so that the facilities reach to all corners of India. I hope to create world-class boxers and MMA fighters in the next 2-3 years from India.”

Singh, 30, has made an explosive start to life in the paid ranks by blowing away his first four opponents inside three rounds. The Indian superstar takes on French terror Matiouze Royer in his fifth professional fight this Saturday at Stratford’s Copper Box Arena. Knockout merchant Singh knows it is crucial that he wins at the Copper Box Arena and then again at Bolton in May before setting his eyes on a huge Indian homecoming in the summer.