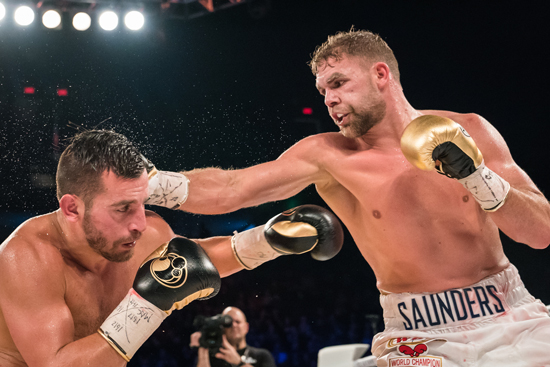 IF DAVID LEMIEUX did, indeed, bang up his hand – as he claimed after being completely bamboozled by Billy Joe Saunders in Montreal on Saturday – he must have done it taking a swing at thin air, because he didn’t connect with much else on the night.

The plaudits have rightly been flowing in following Billy Joe’s expert tutorial on the art of hitting and not getting hit and it is a shame Lemieux could not find it in himself to be a bit more gracious and give credit where it is due.

The amount of blood flowing from his facial features should have been enough to tell him that Bill far from did a runner. He just totally outsmarted him and the punches dispatched were on a one-way ticket.

Lemieux looked to me like a man who was shadow boxing and couldn’t catch his shadow.

I can’t recall too many more dominant performances from Brits on the road in recent years than the exhibition Bill put on at Place Bell in Laval, where the locals ensured it was a pretty hostile atmosphere for the champion on the night.

I thought Bill was exceptional and really proved his credentials as a top level operator. He proved that, when he is switched on, he is up there with the best.

Bill, if all goes to plan, has a busy and lucrative year ahead of him, but it might not have turned out this way had events taken a different turn earlier this year.

It is true that Bill came to see me and was giving serious consideration to hanging up the gloves. He said he couldn’t get motivated and was fed up with fights falling through, while he was coming off a poor performance against Artur Akavov where he struggled with the weight and didn’t really take it seriously.

To cut a long story short, we sat down and had a good talk and I told him he needed to get himself sorted out and be trained by somebody who would get the best out of him.

Thankfully, with Dominic Ingle taking him on, it all fell into place and he has done a great job with him.

It has not just been about getting Bill fit and on the weight, it has been about getting into his mind and achieving that focus. If you are not there mentally you will struggle in this sport and Dom has got him to the right place on a number of levels.

It has been a job well done all round and, importantly, Bill also caused quite a stir starring on HBO and they were impressed with what they witnessed.

The outcome was not what they anticipated because Lemieux was a big favourite over there and it was believed Bill’s title was there for the taking. We obviously saw things differently, but even I didn’t expect him to do quite such a job on him.

Bill can now enjoy his Christmas and have a break before getting back in the gym. We will have a date sorted out for him soon so he can get back in the ring and do what he has proved he does best.