After a period of internet inactivity, I am told Chris Eubank came out of Twitter hibernation a little while ago and attempted to tease Billy Joe Saunders into signing up for a rematch with his boy.

Maybe the time away from the keyboard was spent searching for the pen that was so conveniently mislaid when the time came to back up the big talk and sign the contract for the fight with Gennady Golovkin.

Fortunately Kell Brook had no such problem in locating his biro and willingly stepped up to save the show this weekend, enabling the fearsome Kazakh to fight in the UK for the first time.

As Matchroom wondered out loud a couple of days back when predicting fight week would run like clockwork. “Imagine if this was Eubank?” he pondered, going on to suggest that it would’ve been hard work even getting him to the weigh-in.

Well, I can tell you that not much has changed on the Eubank front. On three occasions we have asked him to front up at a press conference to promote his forthcoming British title defence against Tommy Langford on October 22 – and three times we have drawn a blank.

It is typical of them and anyone who read Matchrooms account of the Golovkin debacle in Boxing News last week will understand how Eubank snr is destroying his son’s career.

In fact, his latest bout of misplaced arrogance is going to cost them even more money because I have asked the BBBC to withhold part of his purse due to his breach of contract.

After the third time of asking them to fulfil their obligation and publicise the fight, I then got a message from his wife asking if we can meet up. I don’t want to meet up, I’ve got no interest in speaking to Snr , all I want is for Jnr to show up and act professionally in promoting a fight I won the purse bid for.

Taking to Twitter and getting on Bill’s case is a typical Eubank tactic. The frustration is that on two occasions Bill has signed up for a return with Chris Jnr and both times his agreement was not reciprocated.

All the messing around cost myself and Bill a lot of time and Anadin.

Chris is right about one thing. A rematch makes perfect sense and is a natural fight. So why didn’t they sign up for it when it was twice put on the table?

It wasn’t easy enticing Bill back into negotiations on the second occasion after so much time was wasted first time around, so he is pushing his luck hoping to strike third time lucky.

Do they really want it though? Someone got in touch with me recently about making the fight, but stating a proviso that it must happen in October.

Firstly, that wouldn’t give Bill enough time to prepare for a match of this magnitude and, secondly, Eubank Jnr is already otherwise engaged. Or was he planning on fighting Tommy Langford and Bill in the same month? 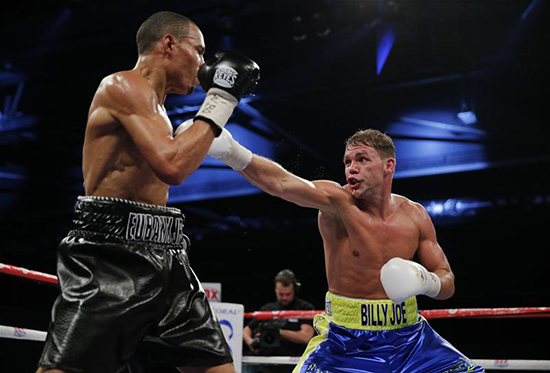 It is the same MO with everything the old man does – he calls a fight and wants everything on his terms. This is a fella who issues ultimatums to champions while sitting there with nothing.

He has been told that there are no slots in our fight schedule this side of Christmas and, if he does want it, the first available date is in January. We have told him he can have the fight then and, strangely enough, we have heard nothing back since.

I would suggest that Eubank and son just focus their minds on the  tough challenge ahead, which is Tommy Langford in Cardiff on October 22.

As for Bill, he has been working hard in Spain and will return to action on the Fury-Klitschko card on October 29. He needs to get a fight under his belt and get him firing for a big one next time out.

The game-plan is a big fight, we are not going to mess around, because it is pointless just having routine defences when he needs a massive challenge. That is what he is going to have and you can probably imagine where we are going with this.

Bill genuinely wants to be involved in a blockbuster bout, not to just talk about one.