ANTHONY YARDE: “HOBBS IS TOUGH BUT THE HUMAN BODY CAN ONLY TOLERATE SO MUCH PUNISHMENT!” 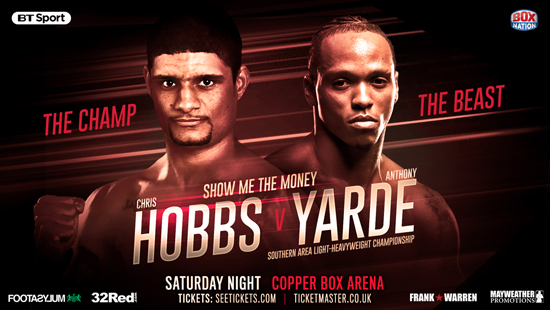 Fight fans should witness the full extent of Anthony Yarde’s feted potential this weekend when he enters a championship ring for the first time at the Copper Box Arena in Hackney.

The 25 year old ‘Beast’ from Ilford, Essex has required just 16 rounds combined to exterminate his opening 10 opponents since entering the profession as a relative novice two years ago.

Serving soldier Hobbs is four years his senior, has boxed almost three times as many pro rounds and has already completed the 10 round championship trip whilst collecting the crown from Hemel Hempstead’s previously unbeaten Jordan Joseph at the York Hall in March.

In eight paid gigs, hard man Hobbs has never been dropped and his only reverse came when he was withdrawn with a dislocated left shoulder against Swindon’s very able Kelvin Young (just five losses in 24 at the time) in March 2016.

He represents Yarde’s toughest test by some distance but the Tunde Ajayi coached prospect covets the challenge.

‘I’m now entering the lowest title level, in line with my periodical progress. Others talk about me targeting higher titles but I don’t believe in rushing. I’m developing at the perfect rate,’ says ‘The Beast’ who is yet to venture past round four.

‘I don’t feel any greater pressure. The only pressure is what you put on yourself. It’s just another fight. I’m 100% confident that I win, the pressure is the manner I win, how impressive I look.

‘Chris Hobbs brings this reputation for toughness. But the human body can only tolerate so much punishment and there won’t be much he can do once the right shots land. My prep is totally focussed on using my skills to dissect opponents, rather than to blast through them.

‘I’ve only watched a 10 second clip of him. That’s it. He’s not an opponent I need to unduly worry about. Tunde will do the research and pass on a few little pointers on the day of the fight but if I can’t deal with guys at this level without studying their strengths and weaknesses for hours then I’m not the fighter that I think I am.

‘I focus on what I do best and just work things out on the job. I’d be very surprised if Hobbs is still standing after five or six rounds….very surprised!

‘I win because I’m bigger, stronger, tougher, the better technician and I have a higher boxing IQ and I guarantee I’ll want it more. I’m superior in every department due to all the graft I put in at The Peacock gym.’

Body beautiful Yarde has slaughtered six victims in the opening session and a further three in round two but has no intention of prolonging his championship debut simply to acquire ‘artificial’ experience.

‘Everybody else covets that I get some rounds onto my CV but I don’t. I’m quite happy to continue bashing up every opponent early. I know from gym spars that I can go 12, 15 rounds when the time comes,’ he claims.

‘As I’ve said before, Mike Tyson and Deontay Wilder banged everybody out early but, when they were forced to go late rounds, they did it effortlessly. Wilder hadn’t been beyond round four prior to being taken the (12 round)distance against Bermane Stiverne in his first world title challenge.

‘Eventually, someone will take me late….but I don’t think it’ll be this Saturday!

All floor seating at the Copper Box Arena has now SOLD OUT.