Soldiers from the 2nd Battalion Duke of Lancaster’s Regiment visited The Finest Boxing Gym to show their support for Manchester’s Lightweight King Terry Flanagan who makes the second defence of his world title against Scouse challenger Derry Mathews this Saturday at the Liverpool Echo Arena. 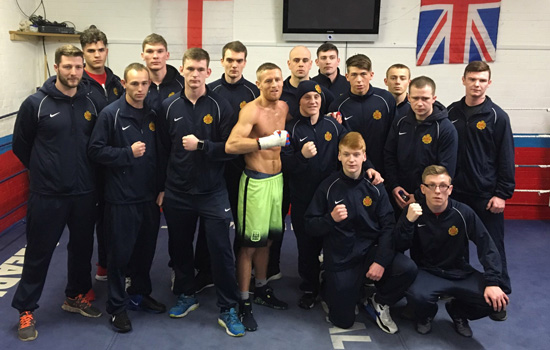 Sergeant Ryan Walton, coach of the ‘2 Lancs’ boxing team, and his comrades were treated to a scintillating display from the all-action Turbo before getting the chance to meet the champion up close and personal. Flanagan looked in fantastic shape ahead of his big night and Sergeant Walton was blown away by the speed of the Ancoats man.

“He looks incredibly fast and you can’t see a pound of fat on him. It’s fantastic to see a world class fighter training for a world title fight. After watching him in the ring today I’m confident that he’ll get the win on Saturday,” said Walton.

The 2nd Battalion specialises in dismounted close combat operations using light vehicles and foot. Walton and his Battalion enjoy an envious reputation for their sporting prowess and the life-long boxing fan hopes his team benefited from watching a true professional.

He said: “All of the lads have loved coming along to the gym today, everyone in the Battalion is massively into their boxing so it was a nice treat for them. Being a Manchester-based Regiment we’re obviously backing Terry to get the job done. I think we’ve all learned something today by watching his speed and movement.”

There is a long and proud tradition of boxing in the British Army. Sergeant Walton is a strong believer in the benefits of the noble art and says it instils a whole new level of discipline and determination in himself and his fellow soldiers.

He said: “I’ve enjoyed watching and participating in boxing all my life. I’ve been boxing with the Battalion since we set up the team around six months ago and we’re constantly improving and learning which is good to see,”

“We’re just establishing ourselves at the moment and I’m really pleased with the progress we’re making as a team. We do our own physical training every morning and then pad work and sparring in the afternoon so it’s great for the fitness!”

Flanagan, who is undefeated in all 29 of his professional fights, was delighted to host the 2nd Battalion. The 26 year-old was more than happy to spend time with the Lancaster troops posing for photographs and signing memorabilia.

He said: “They put their lives on the line protecting our country; they’re the real heroes. It was a real boost having them come along to watch me train today and I’m thankful for all of the support I’ve received from everyone.”