ASKIN OUT TO PROVE A POINT IN BENNETT REMATCH

Blackpool cruiserweight star Matty Askin says he’s is in the shape of his life ahead of his big rematch with bitter rival Lawrence Bennett at Liverpool’s Echo Arena on Saturday 12th March, live and exclusive on BoxNation. 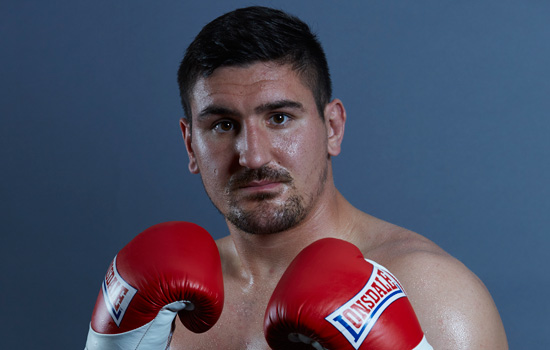 The 27 year-old has promised to destroy Bennett after their previous fight ended in controversial circumstances. Askin was stretchered off to the dressing room after falling out of the ring along with Bennett in the first round. With the Blackpool bruiser unable to continue judges declared the fight as technical draw. Determined to put things straight, Askin has been putting in the hours in the gym ahead of his big night.

“I’m in the best condition I’ve been in for a long time and that’s the truth. I went over to Denmark for two weeks for sparring and then the show got pushed back so I had to come home. I’m heading back out there for another eight days where I’ll be sparring with a world class fighter in Micki Neilsen who’s a southpaw which is perfect preparation,” said Askin.

Askin lost out to Ovill McKenzie in a gruelling battle for the British and Commonwealth Championships in March last year. Despite losing by a majority decision Askin is confident he would get the better of McKenzie should the pair meet again.

He said: “I’m going to dispose of Bennett and then see what the team comes up with. I’d love the rematch with Ovill McKenzie but I know he’s fighting for the European title now so it’ll have to wait. I’d like to fight whoever holds the British and Commonwealth titles and then go from there,”

“I’m confident I’d get the win this time round. I hadn’t boxed for a year going in to the fight which wasn’t ideal. You could see in the first six or seven rounds that I was too much for him but then my composure just left me. I’d not been active enough and it showed in the last half of the fight but now I’d destroy him without a shadow of a doubt.”

Currently ranked 6th in the British and Irish standings, Askin says he has the potential to reach the very top of the British cruiserweight scene and plans on kick-starting his 2016 campaign with a knockout performance.

He said: “There’s nobody really leading the pack that is outstanding. I think it’s still there to be grabbed and there’s some good fights to be made in the British scene so it’s quite an interesting weight division to be involved in at the moment,”

“If I put a good string of performances together then I’m right back at the top so my main aim at the moment is to perform to the best of my ability in every fight and stay as active as possible.”

Cruiserweight rivals Marco Huck and Ola Afolabi clash this Saturday night, televised exclusively live in the UK on BoxNation, for a fourth time in six years and Askin is backing Huck to claim his third win.

He said: “I think Huck will win again on points in a close fight. Afolobi is coming to the end of his career and Huck still looks like he has a lot left in his tank.”