BACK ON THE BRENTWOOD BEAT – THE FRANK WARREN COLUMN 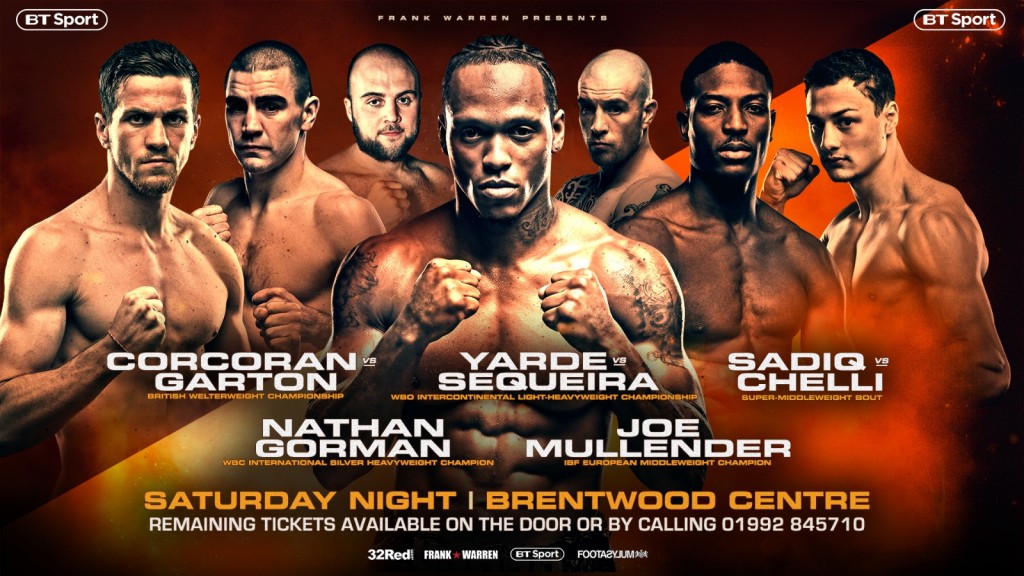 WE ARE BACK in business at the Brentwood Centre on Saturday night with a cracking little show featuring a number of fights I would highly recommend tuning in for live on BT Sport.

I often talk about certain match-ups that you could ‘put on a phone box’ and we have got one of those this weekend with the British welterweight title at stake between Gary Corcoran and Johnny Garton.

I am sure they will both start with the best of intentions to follow the tactics and instructions set down by their corners but, really, these two know only one way to fight and enjoy doing it.

It won’t be long before the ‘Hellraiser’ and the ‘Pexican’ just meet in the middle and trade lots of leather. It is a great fight between two top fellas who are fully deserving of a shot at the British title.

The opportunity to fight for the Lonsdale belt came about through Bradley Skeete vacating a belt he has already won outright, so it makes perfect sense for him to pursue other avenues and clear the path for a natural match between Gary and Johnny.

After his European title setback in April, we will also see Bradley on the Brentwood bill in a comeback fight before we restore him to world level combat in the near future.

A fight that seems to have caught the imagination of the public is an unusual match at super middleweight between Zak Chelli and Umar Sadiq.

I say unusual because it is not common for two top prospects with just seven fights between them to be fighting each other at this early point of their pro careers.

It happens very rarely but, you know what, it is not the end of the world for the loser and the thing about it is they both wanted it and have been calling each other out.

We could have dragged it on for another year or so, but they were both insistent. They kept driving me mad about it so we have got it done and it is one for the fans to get excited about.

It is not something I am necessarily determined to see more of from guys with just a few fights in the bank because I like to see people get a few wins and some experience under their belts before getting to this sort of fight, but this is just what they want, so fair play to both of them and I am looking forward to seeing it.

Topping the bill in Brentwood is Anthony Yarde, who has just his 17th professional fight against the Argentinean Walter Gabriel Sequeira.

It is not the biggest secret that we encountered problems in matching Anthony for this one. We are seeking highly-ranked opponents to give him a real test and we tried to get a number of people to come over and take him on.

We thought we’d got a deal done with Sean Monaghan, but then he came back with the most ridiculous demands. He was an ideal opponent with a good ranking across the board, but it just fell apart and that is where we are.

We want to get him in with people who can move Anthony up and gain valuable experience but it is not always possible and, as I always say with him, it is a process and he will still benefit from a useful workout on Saturday against Sequeira, who has only been stopped once and has won his last four.

Anthony knows himself that he has got this fight and then we are looking to push for a world title fight next year and meaningful fights ahead of that.

I want to keep making the fights that matter and I have had no qualms over making tough matches for our guys that really move them on – evidenced by our recent pairings of Catterall-Davies, Sharp-Woodstock and even Chelli-Sadiq this week.

I tend to cop a bit of flak for Anthony’s opponents, but it is a team decision and after this fight I will be sitting down with his trainer-manager Tunde (Ajayi) to mutually agree where we go from here.

Being upwardly mobile certainly applies to one of our top young heavies, Nathan Gorman, who is improving all the time and will be keeping busy on Saturday ahead of being booked to appear on the mammoth Warrington-Frampton card at the Manchester Arena on December 22.

I believe Nathan, along with Daniel Dubois, are the two biggest young talents in the world of heavyweight boxing and they are doing everything that is being asked of them as we move them along purposefully, bearing in mind their tender years for the division of just 22 and 21 respectively.

In closing on the Brentwood show, I would like to wish our recent signing, the middleweight Caoimhin Agyarko, every success on his debut and I look forward to a big future ahead working with him.

CONGRATULATIONS ARE IN order to Zolani Tete for progressing into the semi-finals of the World Boxing Super Series following his clear points victory over Mikhail Aloyan at the weekend.

I’ve noticed that Zolani doesn’t always look his usual destructive self against little fellas like the last one – Omar Andres Narvaez – who didn’t come to fight. This one did and I think our man did a good job considering he was always going to be up against it.

He went into the lions’ den yet again – it is not like he ever gets home advantage, is it? –  and he did what he had to do. There are not too many that venture into Russia and come away with a unanimous decision.

We are now in a position to get a fight we have wanted all along, should Ryan Burnett manage to overcome Nonito Donaire in his quarter final. I actually suspect that the Burnett team thought the Russian would win the fight, but Zolani is now ready and waiting for Ryan should be prevail in Belfast on November 3.

BOXNATION CONTINUES TO deliver the finest fights from across the globe and, in the early hours of Sunday morning, the channel against showcased the man I believe to be the best America has to offer at the moment in Terrence Crawford.

Now a three-weight world champion and operating at welterweight, Crawford is making light of the heavier opponents and proving that he is a class above – outclassing the previously unbeaten Jose Benavidez Jr  before poleaxing him with a devastatingly precise uppercut in the final round.

There are big fights out there to be made for him at welterweight – not least against someone like Errol Spence – and BoxNation will be the place to see them happen.