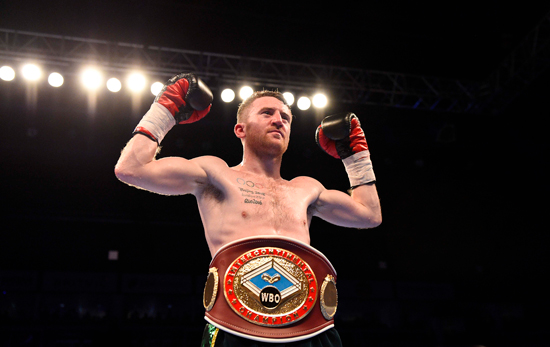 PADDY BARNES believes his place in Irish boxing history depends on the outcome of his make-or-break world title challenge next month.

Barnes is one of his country’s greatest ever amateur boxers, but is willing to risk his reputation when he faces WBC flyweight champion Cristofer Rosales at Windsor Park, Belfast on Saturday August 18, live on BT Sport.

The Irishman’s amateur stash includes bronze medals at the 2008 and 2012 Olympics, he struck gold at the Commonwealth games in 2010 and 2014, and was 2010 European amateur champion.

But the 5ft 4in all-action star insists: “This is the night that defines my boxing career.

“There were great achievements as an amateur including Olympic bronze medals, but that is only third place in the world which is great.

“To be the best in the world at your weight, WBC world champion is definitely the one to win.

“I did great as an amateur, and people will remember me for what I achieved but a world professional title is what I really want.

“I ticked the boxes as an amateur and I want to do the same as a professional.

“I would swap everything I did as an amateur to win this fight.”

Unbeaten Barnes, 31, will only be having his sixth professional fight when he challenges Nicaraguan Rosales (27-3) in front of more than 20,000 fans.

No stone will be left unturned and Barnes has moved from the family home in Belfast to Glasgow for a training camp under Danny Vaughan ahead of the biggest night of his fighting life.

He added: “Even now I am away from home preparing, but it makes no difference. When I was an amateur my training camps were in Dublin.

“I have been doing this since I was 16 years old. It is a bit harder now because I have two kids, but hopefully it will be worth it in the end.”

Barnes is bringing in sparring partners from Mexico and the United States, after initial plans to spar with IBF featherweight champion Josh Warrington fell through.

Warrington is lined up to face Windsor Park headline act, Carl Frampton later this year and Barnes says: “Josh would have been ideal sparring.

“That would have been a great spar, but he is probably be a bit too heavy at the minute because he is a featherweight and will be weighing over that right now.

“I would have loved to spar him because he is such a great fighter.”