Another weekend, another world title goes on the line in the fight city of Liverpool, although blue is certainly not the colour when Liam Smith hits the town. 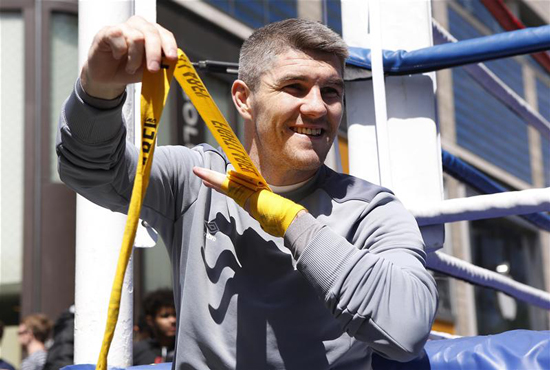 The fighting brother known as Beefy makes the second defence of his WBO world super welterweight title he won in spectacular fashion against John Thompson in October of last year in Manchester.

He operated in world title tandem with Terry Flanagan on the night and then with Billy Joe Saunders in December – also at the Manchester Arena – when he ticked off a first defence against the game local favourite Jimmy Kelly.

So it is high time for a homecoming and that is what he has got to look forward to on Saturday at the Liverpool Echo Arena when Montenegro’s Predrag Radosevic will have a tilt at claiming Beefy’s belt.

Many do not give him much of a prayer because he is not a familiar face, but Liam will have to be on his guard because Radosevic is an experienced operator with only one defeat on his 31-fight card, that being nearly three years ago in Germany to seasoned stalwart and now five-time world champion Felix Sturm.

Sturm, of course, is now in stormy waters after falling foul of the drug busters following his defeat of Fedor Chudinov, but he was a class act in the ring and that was the level Radosevic fell short of in 2013.

So don’t expect it to be a walk in Stanley Park for die-hard Liverpool fan Beefy. Whenever world champions defend their titles it can be something of a banana skin whoever the opponent but there is so much at stake for Smith it is one he can ill afford to slip on.

Should he be successful – and, naturally, I expect this to be the case – we have something very special in the pipeline for him, a September blockbuster that will stir the juices of fight fans everywhere.

We should be in a position to reveal all very soon – so watch this space!

Another with world titles on his mind at the Echo Arena will be Paul Butler, who has to negotiate a final eliminator for the WBO world super flyweight crown. The Babyfaced Assassin is up against the tough Thai – with an even tougher name to pronounce – in Petchbarngborn Kokietgym.

It is time for Butler to push on and do the business against Kokietgym, with the prize being a shot at Japanese puncher Naoya Inoue, known as the ‘Monster’, with eight KOs out of 10 on his CV. That would be some fight.

It is no secret that a match with Belfast’s Jamie Conlan was an attractive option for Butler and was firmly on the horizon for this year. It certainly remains on the to-do list, but Butler belongs on the world stage so we don’t want to hold him back in his bid to become a two-time champion.

Butler and Conlan battling it out for a world title would be an even bigger draw and hopefully that is one we will have to look forward to.

The Scouse South African Zolani Tete features once again in his adopted city on Saturday, defending his IBF International bantamweight title against Victor Ruiz. Tete thrilled the fans last time out in Liverpool with his jaw-dropping destruction of Jose Gonzelez to claim the belt and, believe me, it is only a matter of time before he is once again the holder of a full world title.

For boxing fans, Tete is a must-watch and we are delighted he will again be demonstrating his supreme skills on our bill.

Also, keep an eye out for Ryan Farrag’s defence of his EBU title against the Frenchman Karim Guerfi. Farrag won his title on the road against Stephane Jamoye in Belgium, a feat matched by Guerfi in 2013.

There has been some lively tit-for-tat on social media between the pair, so this week’s head-for-head should provide an interest appetizer ahead of the main course on Saturday night.

Four title fights, a world title final eliminator and an appearance from British super welterweight champion Liam Williams ahead of a big date in July should make it another night to remember in Liverpool.

A card packed with quality fights is what it is all about for me and if you can’t make it to the Echo Arena then make sure you tune in to BoxNation from 6pm for all the action and analysis.