The 22-year-old from from Belfast, Northern Ireland, put pen to paper at a press conference in London to announce the show on Saturday 30th April at the Copper Box Arena, London, where he will challenge British Champion Ryan Walsh for his title. 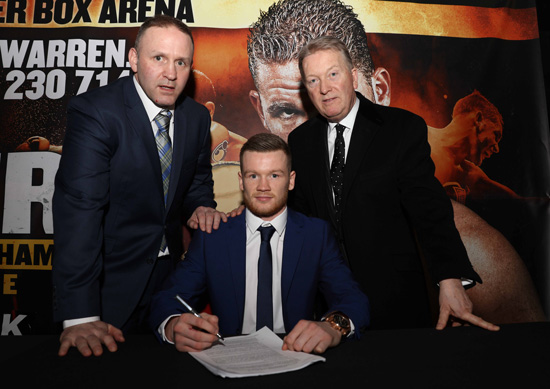 Known as ‘The Assassin’, hard-hitting Tennyson has amassed an impressive record of 16-1 with 13 knockouts since turning professional in September 2012 following a glittering amateur career that saw him win 92 out of 104 fights and multiple titles.

Under the guidance of manager and promoter Mark Dunlop, Tennyson has developed into an outstanding and exciting talent and now with the backing of Hall of Fame Promoter Warren, he’s ready to burst onto the big stage.

“I am honoured to have been hand-picked by Mr Warren to join his promotional company; I have grown up watching him create legends such as Naseem Hamed, Joe Calzaghe & Ricky Hatton. He has given me an unbelievable opportunity to make something great for myself and the people of Northern Ireland and I fully intend to grab it with both hands” Said Tennyson.

Dunlop, who will remain as Tennyson’s manager, is equally thrilled. He said: “While James is only 22 he totally lives the life, he is very dedicated and focused, blessed with a knock-out punch in each hand, natural stamina and possesses great all-round boxing skills. He has not from a famous boxing background so has got himself in this fabulous position through his own hard work ability and more importantly will. Tennyson is a beast, a monster his exciting style is made for TV and can go all the way.”

Promoter Frank Warren is delighted to welcome Tennyson to the team.  “James is an exciting talent and I’m thrilled that he’s signed with me.  His first fight will be on the Copper Box Arena and he’s got a very tough fight against the British champion Ryan Walsh which will be a cracking contest.”

Tennyson captured the Irish title at super-featherweight in only his sixth fight, stopping Mickey Coveney in two rounds.  Moving down to featherweight, he then won the Celtic title on a seventh round disqualification.

Respected reporter Nicky Fullerton from the Belfast Newsletter described Tennyson as a product of the peace process in Northern Ireland coming from mixed religion parents and he’s adored by both sides of the community.  He always boxers with a Dove on his shorts in support of lasting peace in Northern Ireland.

With only one early career loss, Tennyson has gone eight fights unbeaten and his last four have ended in knockout inside in three rounds.