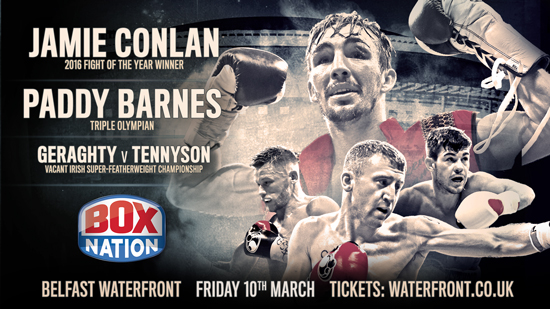 A head cold has forced Jamie Conlan to postpone his upcoming fight against Yader Cardoza at the Belfast Waterfront on Saturday 18th February.

Conlan was due to take on Cardoza for the Vacant WBC International Silver Super-Flyweight title but will now face the Nicaraguan on the rescheduled date of Friday 10th March, at the same venue.

“It’s incredibly frustrating as I’ve been working hard and preparing for this fight for the past two months,” said a disappointed Conlan. “I’m gutted that the show has been postponed but this is boxing and these things happen unfortunately.

“I contracted a head cold on my return to Belfast and as a result I’ve missed some vital training sessions. Yader is a former World Title challenger and I can’t take any chances; I want to put in a real performance for all of my fans.

“This is dangerous sport and I can’t afford to come in at anything less than 100%. It is just one of those things but I’ll be fully fit and prepared to put on a show on March 10th. This is a brilliant card to be topping and I hope you can all come along to the rearranged date and watch me win another title.”

Irish fight fans will still be treated to an unmissable evening of boxing just three weeks later, with all bouts on the card remaining the same.

Tickets purchased for the Saturday 18th February show will still be valid for the rescheduled Friday 10th March date.