Bellowing Bellew needs a rap from the Board 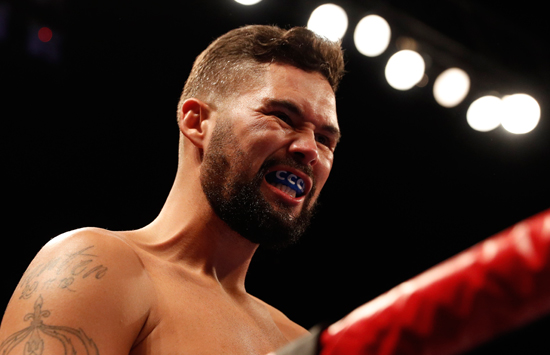 Tony Bellew has always had a loud mouth – more bellow than Bellew – but his behaviour following his ko victory over hapless American B J Flores in home city Liverpool last weekend made him appear more like a bell-end.

The Liverpudlian leapt into the crowd from the ring and had to be restrained as he berated the onlooking David Haye in a manner which included language for which the Sky interviewer felt compelled to apologise.

Such antics seemed drawn from the wilder excesses of WWE at a time when, more than ever, boxing needs to demonstrate is a reputable and respected sport.

WBC cruiserweight champion Bellew unashamedly has a gob on him as wide as the Mersey when in full cry, which his supporters seem to think is part of his charm.

Fair enough, but on Saturday night he went too far and is in need if a severe reprimand, at least, from the Board of Control.

Board president Charlie Giles was steward in change and doubtless took note.

It is also likely the Board will want to have a word with Bellew about the unfortunate words he used in an interview with a broadsheet newspaper on the eve of his first title defence when he declared that boxing was ‘legalised killing’.

I gather his promoters were less than ecstatic about it especially as the day of the fight coincided with the funeral of fatally injured Scottish boxer Mike Towell in Dundee. It seemed insensitive, to say the least.

Like fellow ranter Tyson Fury, Bellew can sometimes be quite amusing but equally like Fury when the mood takes him he can be outrageously foul-mouthed and obnoxious.

Credit to Haye, who is not unused to such situations, himself, and who Bellew wants to fight next, for remaining impassive during the rant.

And Bellew, who undoubtedly has done well to become one of Britain’s 14 world champions, should be careful what he wishes for.

Any such encounter would have to be at heavyweight where the Hayemaker surely would be too big and powerful for the Mersey mouth.

As it happened Bellew’s bellowing wasn’t the loudest or most irritating to be heard at the Liverpool Arena.

That belonged to MC John McDonald, who seems to turn up the volume every time he appears.

McDonald is a good MC, but he does love the sound of his own substantial voice.

Indeed so loud and long have his pre-fight introductions become that he sounds increasingly more like Brian Blessed than Michael Buffer.

Tone it down, John, otherwise the fighters won’t be the only ones in danger of getting busted ear drums!

Good to see Scottish referee Victor Loughlin at last week’s Boxing Writers’ awards in London and subsequently in action again in Liverpool in control of the Luke Campbell-Derry Mathews fight.

Apparently Loughlin was devastated after the death of Mike Towell, whose fatal bout with Dale Evans in Glasgow he handled.

By a tragic coincidence he was also in charge when Chris Eubank jnr ended the career of Nick Blackwell, who suffered a brain trauma but fortunately survived.

In neither case was Loughlin to blame. His handling of both contests was exemplary.

Quickly getting back into the ring was the right decision.

In my view he is one of our best – if not the best referees.

I’ll put you and your pathetic Sponge Bob haircut to sleep.

A ring’s a ring to me. I’ll fight him anywhere.

Liam Walsh makes it clear that he’s ready, willing and able to take on Jose Pedraza for the Puerto Rican’s IBF super featherweight title wherever it can be made.

I like Chris Eubank but at the end of day he’s a middleweight who rightly or wrongly is notorious for pulling out of fights with middleweights. So I certainly I wasn’t ready or prepared to sign up to fight.

George Groves explains why fighting Eubank jnr is a no-no rather than a no-brainer.

Everyone seems to view me as a long strip of piss they can just rough up. Wrong! To get to my ‘puny’ body you have to get past my jab and it feels like eating a right hand. Once they’ve munched on a few of them they all quickly change.

Why there’s more to Bradley Skeete than meets the opponent’s eye.

There is no money in boxing. You have probably got five fighters in Britain who are earning top money, the rest will be on minimum wage.