Enzo Maccarinelli returned to his dynamite punching best with a fourth round stoppage of Roy Jones Jnr at the VTB Arena in Moscow last night and hailed the former American great. 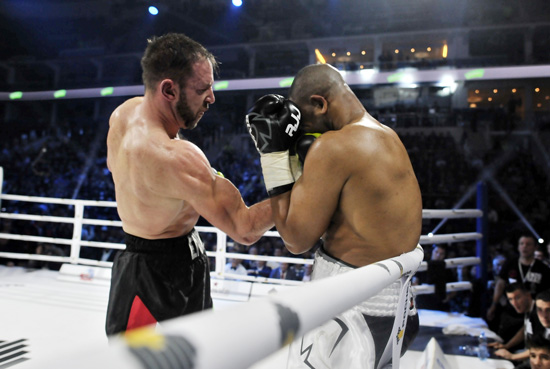 Welshman Maccarinelli, a former WBO world Cruiserweight Champion, landed a devastating right hand to finish off the former five-time world champion leaving him crumpled on the canvas with the referee waving the fight off.

Maccarinelli respectfully held off celebrating in the ring whilst Jones recovered his senses and got to his feet, but the Swansea puncher was thrilled with his victory and says he still wants to become a two-time world champion next year.

“First of all I’d like to say it was an honour to share the ring with Roy who in my eyes is still a ring legend and I hope that he recovers fully from this,” Said Maccarinelli.

“Regarding my win, I’m over the moon with the performance and it showed that I’ve got the power to hurt anybody.  This fight was at cruiserweight where I’ve held a world and I’ve also dropped down to light-heavyweight where I fought Juergen Braehmer for a world title, I’m comfortable at either and wherever the best opportunities are I’ll take them,”

“I said before the fight that I fight best when the pressure is on and coming out to Russia where Roy has become a favourite certainly put the pressure on me to perform and I did that,”

“I knew that the opening rounds might be a bit cagey, but I knew that once I sized him up and got my range that it was only a matter of time before I would take him out.  My jab was good and I clipped Roy with a right hand early on which he brushed off but I knew that it hurt him.  Then in the fourth I started to connect with uppercuts and he was starting to go so I knew I’d got him and then I landed the hard right to finish him off.”

“That ends the year nicely and now I want to keep busy in 2016 and get another world title shot to become a two-time world champion.”