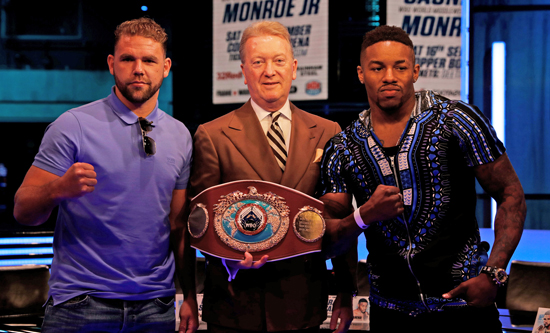 As he is so adept at doing when he gets the opportunity to lock eyes on a forthcoming opponent, Billy Joe Saunders went straight for the jugular when he was introduced to Willie Monroe Jnr ahead of their WBO world middleweight title fight at the Copper Box on September 16.

Bill’s press conference rhetoric, focusing on when Monroe called time on his challenge for the titles held by Gennady Golovkin back in 2015, definitely appeared to hit a nerve with the 30-year-old from Rochester, New York.

He was a bit stumped and didn’t have much to say in return when Bill chose his line of attack, but it may serve to only add to his resolve ahead of such a big opportunity to gatecrash the world title picture.

Bill doesn’t hold back if he perceives a weakness in opponents. He studies the form, knows his boxing and obviously suspects he has found a chink in this fella’s armour.

He now needs to exploit it on the night and look good in attempting to send Monroe home without any additional baggage. The American is a smart boxer with a good record, so it will be no easy night’s work for our man.

The fact that Monroe is a dangerous opponent actually works in Bill’s favour because the higher the threat level, the more he raises his own game and gives us a glimpse of what he is capable of.

It was noticeable that Bill was back to his lively old self at the press conference at the BT Sport Hub and seemed to have that bit of bounce about him again. He has got his enthusiasm for the game back after becoming a bit despondent over the last six or seven months when proposed fights did not materialise.

The plan is now clear – win against Monroe and he will be in pole position to fight the winner of the blockbuster clash between Canelo and Golovkin, with preliminary talks having already taken place.

The intention was to keep Bill busy and active this year, but now a December date with one of the big two now looks a distinct possibility. So there is every incentive for Bill to get the job done against Monroe.

I don’t doubt that Canelo-Golovkin will be a classic encounter and I am certain there will be immediate calls for a rematch. I believe there is a rematch clause in place anyway in the event of a Golovkin win, but in all likelihood this won’t take place until the next Mexican holiday, which is not until next year. 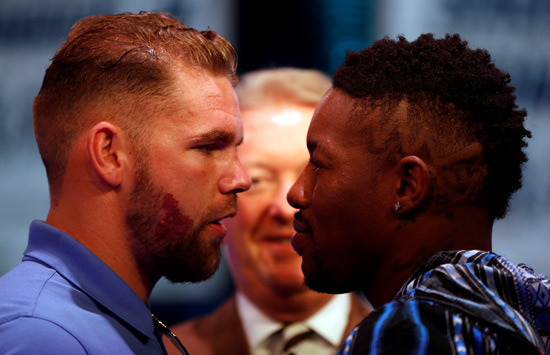 It was also encouraging on Monday to see what good nick Bill is looking in two months out from the fight. He is embracing his new regime with Dominic Ingle up in Sheffield and the good thing with Dom is that he simply doesn’t stand for any nonsense.

As Bill readily acknowledges, he needs to be taken out of his home environment to properly prepare for fights and working hard up there with no distractions has been nothing but good for him.