Conspiracy theories and even talk of curses whirred around cyberspace in the wake of the second postponement of Billy Joe Saunders’ challenge for the WBO middleweight title possessed by Andy Lee. 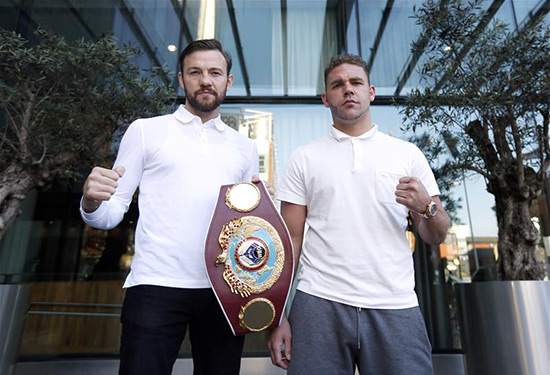 The history boys were first set to get it on in Limerick in September before a virus suffered by the champion set back his training, causing a delay that meant an open-air venue was no longer a practical solution. So Lee’s home city gave way to a Manchester date in October before it was Saunders turn to luck out and catch an elbow in sparring just before he was set to resume his camp.

The postponements and rescheduled dates have resulted in multiple press conferences and face-offs for the pair, who are finally set to go glove-to-glove for real on December 19 on the Xmas Cracker card at the Manchester Arena.

The on-off saga gave the cyber-cynics a field day, but Saunders takes a more philosophical standpoint, viewing the sequence of misfortunes as just sod’s law – or even Murphy’s law.

He just wants a new belt for Christmas.

“It was made in Limerick first of all, giving him home advantage, but it was what it was and I agreed it,” reasoned the mandatory challenger for the title. “There were a lot of whispers going around that tickets weren’t going well and perhaps they weren’t, but I don’t think Andy is the sort of man that would make an excuse. I think he is one that would say they are not going well and we’ll change the date.

“I believe he did have a virus, so it got put back to Manchester, then a day before I was leaving to go back to Spain, I received the cut over in Laughton sparring Jake Ball. I just got caught by an elbow, he didn’t mean to do it and it was a complete accident.

News of the original call-off hit Saunders hard as he was well into his Marbella boot camp with trainer Jimmy Tibbs. It was a blow that was softened for the 26-year-old by early whispers that Limerick was out of the running for the staging of the fight and he would be joining Terry Flanagan and Liam Smith in world title combat in Manchester.

“I was out there and I was on course. I was fit, I was in shape, then I had the phone call and it was devastating, but the one thing I wasn’t down about after the phone call was I was hearing stories that it would be in Manchester.

“I then obviously had home advantage,” added the 22-0 man, who reveals that he did not consider remaining in camp over the course of the delay for fear of becoming overcooked fitness-wise.

“It was a delay of four weeks, but I get fit quickly and I was already in good shape then. It is hard enough being away when you have to be, so when the fight got called off so I thought I would go back for two weeks and tick over. It would have meant me being over there for nine weeks or more and I would have been on the way down.”

Over the course of the press briefings given by the pair, Lee has made of big play of being unable to contemplate defeat to a fellow Traveller, pondering that what happens in that 36 minutes will live with the loser, in particular, for the rest of his life and is what he will be remembered for above all.

It is a sentiment obviously shared by Saunders to a point, but he appears not to be quite as haunted by the prospect. He himself draws on a painful recollection of an episode in his amateur career in 2008 where he squandered his medal prospects on perhaps the biggest platform of all, the Olympic Games. He paid the price for improper preparations and made a second round exit in Beijing. 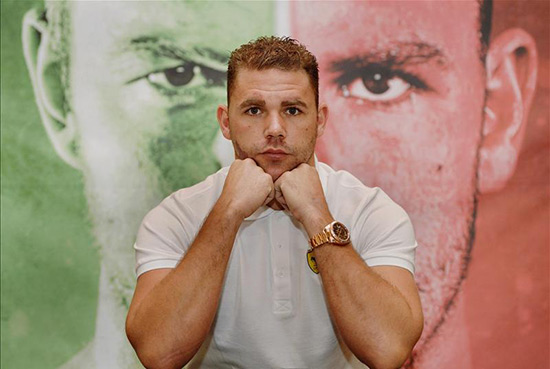 “In our community the loser will get a lot of stick, but we are at world championship level and there is no shame in anybody getting beat because somebody will,” he stated with cold, hard logic. “But I am yet to taste defeat and for big fights I reflect back to the Olympic Games. I still think about it now and I’m at the big stage again.

“This is the biggest stage I’ve been on since the Olympic Games. It still irks me bad, and I don’t want to go back to that same place again.”

Lee perhaps entering the championship rounds of his career might explain him placing more emphasis on the legacy aspect, with Saunders simply backing himself fully to exploit any frailties that emerge with Father Time.

“What is he now? 31 or 32 and he is not a fresh Golovkin type, he’s got a lot of miles on the clock and has had a lot of hard fights,” he considered. “He had a hard start and has had to fight his way to where he is now.

“But there is only so much fight someone can give and I believe I am the younger, fresher, faster, better boxer all round. He’s got the punch, but a cute, clever fighter will have a field day.”

Being the younger man, Saunders would indeed have time on his side if his game plan did come unstuck on the night, but the comeback trail is not a path he would willingly tread.

“Some people say you do come again and of course I would, but this is the here and now and I don’t want to. It’s a long road, a hard road back and I don’t want to travel it, I want to get this. I’m 26 and at 30 years of age I don’t want to be having big hard fights, I’ve got two boys, and at that age I’m not saying I’m going to retire, but if things aren’t going right for me I’m not going to hang around for the money if my health is not right.”

The odds are tight at the bookies for a fight that no expert is confidently calling, with a few firms narrowly favouring the champion. Saunders questions such a status being afforded on the basis of holding the belt, agreeing that had the fight been made prior to Lee pulling it out of the bag against Matt Korobov, he would have been widely tipped to extend his unbeaten record.

“I think with Andy they rave on about him being with (trainer) Adam Booth. He was with Adam Booth when he boxed (Anthony) Fitzgerald and, no disrespect to him because he is a hard fighter, he is not half a talented as I am. I thought that night that it was a toss of a coin in the ring between him and Andy.

“Is Andy one of those fighters who, with his back right against the wall when he is being used as an opponent by the Americans, pulls it out? Or when he is on a stage where he thinks he can handle a fella goes down? No one yet knows that because he’s only been in the ring with a few big names, the likes of Peter Quillin.

“When you get in with those big names it puts your feathers up, it has got mine up now. Has it put his up? I don’t know, there are talks about him taking on Golovkin at the moment, but they must be planning to make that fight without any belt because I’m taking it soon.”

Check back next week for part two of our exclusive interview with Billy Joe Saunders. Billy Joe would like to offer his thanks to Dean Sumner of West1 Contracts, the sponsor of his West Ham training base.