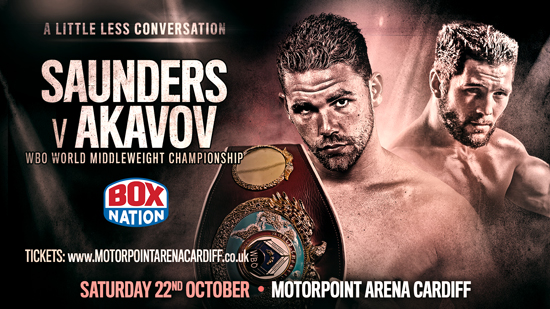 Last December, Saunders defeated Irish hero Andy Lee to take his WBO crown in a close and absorbing fight in Manchester that saw the Hatfield star floor the former champion twice in the third round and go on to claim a majority decision from the judges.

The skillful, hard-hitting, Saunders knows it is vital that he beats Akavov if he is to remain on track for potential blockbuster showdowns with Mexican pound-for-pound star Canelo Alvarez and 160lbs division monster Gennady Golovkin.

Akavov, 28, holds the WBO European Middleweight title and is currently enjoying a red-hot eleven-fight winning streak stretching back to 2012. The 5’9 southpaw known as ‘Wolverine’ made his professional debut against Andrey Korzhenevsky back in 2011 and has never been halted in 17 contests. Now residing in Brooklyn, New York, Akavov has vowed to win Saunders’ world title for his family and country.

Saunders, 27, knows he is in for a risky first title defence against a dangerous and live challenger, but says being World Champion means he has the skills and determination to overcome any challenge.

“Nothing comes easy in boxing and I’m definitely not taking Akavov for granted,” said Saunders.  He’s a strong fighter and very dangerous and if I don’t come in 100 percent then he could cause an upset in my first title defence.  I’m going to make sure I’m in the shape of my life and give Akavov the toughest night he’s ever had, he’s never been stopped before so this is going to be a first for him!”

“I know why they picked me as an opponent,” said Akavov of Team Saunders. “Although I am very honoured and proud to fight for the WBO World Championship, at the same time, I promise to prove that the Saunders camp were gravely mistaken with whatever they were expecting of me in the ring. I represent my family first and my country and that alone will not let me fail.”

Promoter Frank Warren said: “This is Bill’s first fight in ten months, the Russian is a tough guy who is capable of making things awkward. Hopefully Bill will shake off the ring rust with a successful defence to set up a super fight for early New Year. This is now shaping up to be an absolute cracker of a show with five title fights for boxing fans!”

“I know that the champion Billy Joe Saunders is a professional, so I hope he’s not looking past Akavov,” said Lou DiBella, President of DiBella Entertainment. “Artur Akavov is a tough SOB who will bring the fight to Billy Joe. If this is a ‘keep busy’ fight, the champion better be prepared for a tough night. Artur is no joke.”