WBO Middleweight King Billy Joe Saunders has vowed to slap ‘Mad’ Max Bursak before sending him back to Ukraine with his tail between his legs. 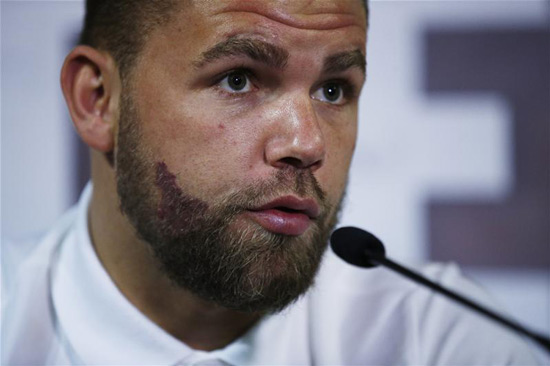 The Hatfield star makes the first defence of his world title against Bursak at Stratford’s Copper Box Arena on April 30, live and exclusive on BoxNation.

“He’s been beaten four times. I should play ping pong with him, if I don’t then I’m not the world champion I think I am,” Saunders told iFL TV.

WBA World middleweight champion Daniel Jacobs (31-1-0 28 KOs) took to Twitter this week to call out Saunders. Jacobs, 31, won the vacant WBA title in September 2014 when he halted Jarrod Fletcher in the fifth round and has since recorded three defences via stoppage – most recently a spectacular first-round victory over Peter Quillin in December.

Saunders was quick to fire back through his own Twitter account, saying: ‘You want me I’ll kick your ***, son. You’re not even the world champ… belt No 2 you hold’. The hard-hitting southpaw says he’ll fight anyone if the offer is right but has bigger fish to fry before dealing with Jacobs.

He said: “I’ve got a lot of respect for him for what he’s been through. Obviously he’s got some fight in him. Would I get that belt around my waist and think I’m a world champion? It’s like winning the WBO Intercontinental and thinking you’re a world champion; it’s not the case is it.

“He’s the man behind the man. I think he’s a good fighter and he had a good last performance against Peter Quillin but why would I want to fight him when I can fight Golovkin?”

Watch the full interview below