Blame Theresa May for the shock defeat of one of British boxing’s champions – a political champion that is.

Foolishly calling a snap election turned out to be pretty catastrophic for the PM – and certainly so for one of her now ex-MPs, the vivacious Charlotte Leslie, who lost her Bristol North East seat to Labour.

Charlotte was the very effective first female chair of the All Parliamentary Boxing Group and had been more than punching her weight for the sport in the House of Commons.

The 38-year-old vicar’s daughter, once voted the sexiest MP in parliament, was famously photographed in a ‘Baywatch’ pose in a bid to raise awareness of the lifesaving efforts carried out daily on Britain’s coasts.

But the ‘blonde bomber’ always spoke most passionately about her love of boxing. She had a mean right hook herself and often sparred with the youngsters, male and female at her local club, as well as swapping southpaw punches with fellow Liverpudlian Tom Stalker and former pro Jane Couch in exhibitions.

Her shock departure means boxing has lost some of its substantial political clout. She once told me she watched boxing “in awe” on the telly as a kid, fell in love with it when she saw Lennox Lewis work out in Bristol and took it up seriously herself “when my mother took me to a gym as an angry 13-year-old and it saw me through to my GCSE’s. I owe boxing awful lot”.

Boxing owes her a debt too, so I suggest that when there is a vacancy for a new Board of Control steward she would fit the bill admirably, especially as women’s boxing could do with more clout at administrative level.

No pushover for BJS

Billy Joe Saunders’ mandatory opponent for his WBO middleweight belt at the Copper Box on September 16, Willie Monroe jnr, has an interesting pedigree. 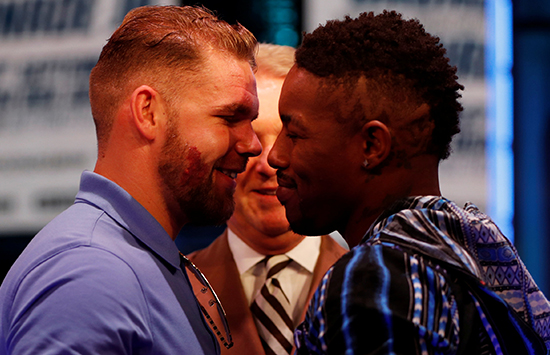 His father fought professionally as did his more renowned great uncle Willy ‘The Worm’ Monroe, whose chief claim to fame was once outpointing a young Marvin Hagler in the seventies – although Hagler later stopped him twice when they fought a best of three..

The Worm was also trained successively by three legendary top cornermen in the business, the late Yank Durham and Eddie Futch, who were both mentors to Joe Frazier, and George Benton, who among others schooled world champions Evander Holyfield and Pernell Whitaker.

This is no pushover for Billy Joe. The 30-year-old Monroe, a New Yorker who calls himself The Mongoose, put up stiff resistance against Gennady Golovkin before being halted in six, one of only two defeats (the other was on a split decision to Darnell Boone).

He is a slick, tricky boxer. As Saunders doesn’t punch quite as hard as Triple G, he might find The Mongoose somewhat elusive. It is a decent match-up.

Whatever we may have thought about the tasteless and obviously choreographed hype and hoopla surrounding the Mayweather-McGregor circus, their upcoming confrontation in Las Vegas has certainly caught the imagination of the public on both sides of the pond.

Though not so much, I suspect, of most genuine boxing aficionados – me included.

But have you noticed one thing about UFC superstar McGregor?

Compared to the flawless features of The Money Man his face shows the effect of his ring wars. Notably a busted nose and a cauliflower ear.

For some reason the latter is known in the trade as a ‘ticket’ (does anyone know why?) but cauliflower ears are something you rarely see in boxing these days – if ever – athough they used to be the sport’s trademark in days gone by.

Yet such ‘tickets’ proliferate in wrestling and rugby, and now UFC.

Did you read that train announcers are to be banned from using the phrase ‘ladies and gentlemen’?

Together with London’s bus and tube networks they will be instructed to employ terms such as ‘good morning everyone’ in case transgender passengers are offended.

Knowing how political correctness proliferates these days it will be no surprise if eventually the instruction spreads to all walks of public life. Including boxing.

How long will it be before MCs from Michael Buffer to Queensberry and BoxNation’s Mark Burdis have to scrap the traditional ‘ladies and gentleman’ introduction (which used to be prefixed with’ My lords…’) for a cheery ‘Hello everybody’ as if they were hosting Live at the Apollo, so as not to upset any LGBT folk who might be fight fans.

Funny old world we live in.